The many reasons to choose Norwegian seafood

There is an ongoing debate regarding the pros and cons of eating wild or farmed fish, or, in fact, eating seafood at all. In this article we look at the arguments for and against wild and farmed fish. Seafood is...

The first question that needs to be clarified is as follow: is fi sh farming and wild fishery a sustainable and environmentally friendly way of producing food. All types of food production have some negative impact on the environment, being pollution to sea and waterways, or the release of CO2 and thereby contributing to global warming.

NOT ALL FISHERIES ARE SUSTAINABLE 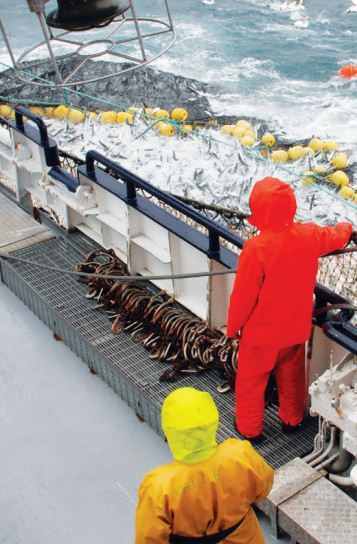 Many of the world’s wild fi sheries are not sustainable. The reasons are overfished stocks or the lack of knowledge about the state of the fish stocks. Fish is entering the global market, caught by vessels fishing illegally in international and national waters of countries without resources to control the activities. Sometimes illegal fisheries have the blessing of corrupt government officials.

Fish from the Northeast Atlantic, whether caught by the UK, Russian, Norwegian or the fishing fleet of other Nordic countries, comes from fish stocks, which are strictly regulated based on advice from scientists. Nearly all the fisheries here are certified as sustainable, according to standards set by independent organisations like the Marine Stewardship Council (MSC) and Friends of the Sea (FOS).

The mackerel fishery in the Northeast Atlantic is currently suspended from MSC certification. The reason is a dispute between stakeholders that has resulted in the total catch being above the scientifically recommended quotas. Still the mackerel stock is healthy and increasing.

There was a large increase in total allowable quotas (TAC) of mackerel from 2013 to 2014, and a decrease in the quota for 2015. The TAC for the current year is 1.054 million tonnes, down from 1.240 million tonnes last year. The TAC is not including Icelandic and Greenland quotas, which are set unilaterally. The agreed TAC for 2015 is distributed with 519,512 tonnes going to the EU, 237,000 tonnes to Norway and 132.814 tonnes to the Faroese Islands.

Resource control in Norway is directed at the entire chain of events, from the point in time when the fish is caught in the sea, through its storage and sale and to its export abroad. The dominant goal of marine resource management is to aid a sound fisheries policy founded on long-term thinking, profitability and sustainable harvesting of marine life. Norway has a long tradition of managing its fisheries based on scientific advice, and combining both environmental responsibility and economic sustainability. The Norwegian management model is so successful that some countries see it as ‘the model’. This model is used as a basis for negotiations with countries which Norway shares fish stocks.

THE CRITICS AGAINST SALMON FARMING

Very few environmental groups will dispute the sustainability of wild caught fish from the Northeast Atlantic. Much attention has been directed towards salmon farming. The salmon farming industry in Norway, the United Kingdom and Ireland is blamed for polluting fjords and coastal areas. It is accused of spreading salmon lice (a parasite) and other diseases to wild salmon and sea trout stocks. Salmon farmers are also drawing criticism for using fish that can be used as food for humans, as fish feed. Also, the salmon farmers are accused of being a threat to wild salmon stocks as salmon escaping farms are interbreeding with wild salmon.

Years ago, the industry was also drawing harsh criticism for using large quantities of antibiotics. Today the salmon farming industry uses very little antibiotics, and its use is far below the quantities used in farming chickens, pigs, cattle and other meat production.

Salmon lice are a problem. But the industry and their opponents disagree on the severity of the problem. The salmon farming industry is investing large amount of money in finding ways of reducing the salmon lice problem. Salmon infected with a large number of lice is creating financial losses. There are reasons to believe that the negative impact of salmon lice on wild stocks is lower than many environmentalists argue. The fall in wild catches from rivers, in Norway and the British Isles, is influenced by many other factors.

LESS ZOOPLANKTON IN THE OCEAN

Marine biologists have seen a drop in the biomass of Calanus, a small zooplankton, in the North East Atlantic. The small zooplankton, 2 – 4 millimetres long, is living from surface level down to 4000 meters. It is a very important feed source for the salmon migrating from rivers to the Norwegian Sea and the sea around Greenland.

There are no indications of rivers far from salmon farming areas having a more healthy salmon stock, then rivers close to farms. This gives a reason to believe the lack of food has a more negative effect on the wild salmon than salmon lice spreading from farms.

Large investments are still being made in finding ways of reducing the salmon lice problem. One fast growing method is the use of “cleaner fish”. Certain species of fish such as lumpfish and wrasse are being used to eat the lice. They are caught by both professional fishermen and are now also being farmed for this specific use.

No farmer wants to see salmon escaping. In January this year, a large number of salmon and trout escaped when very severe storms hit the Norwegian west coast. Much of the fish were recovered using gill nets and other means of fishing. Some farmers had to endure big financial losses because insurances only cover some of the losses due to fish escaping.

The number of fish escaping from the farms has been reduced year by year. Stricter regulations regarding anchoring and the strength of the cages have made them able to withstand most storms. The development of stronger farming gear by the producers is another factor resulting in less salmon escaping from farms. Also, good profitability has made it possible for many farmers to increase investment in new equipment.

THE USE OF FISH IN SALMON FEED

The other complaint against salmon and trout farming is the use of fish feed containing fish that could be used as food for humans. No one is denying that some salmon is being fed with fish proteins that are usable as human food. The main protein source for the salmon is Peruvian anchovies. If Peruvian fishermen could sell this fish for human consumption, they would. But there is no market any place in the world willing to buy catches of 4 – 6 million tonnes at a price that only covers freezing and packaging.

In addition to anchovies, the fish meal used in the feed contains offal from herring filleting, like backbones, heads and intestines. There is also capelin, blue whiting and Norway pout, fish that do not have the quality necessary for human consumption. 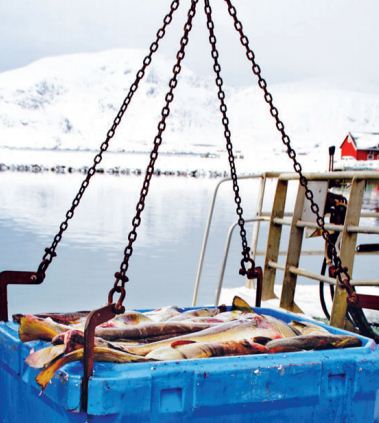 1.8 KILO OF WILD FISH PER KILO OF SALMON

Since 1990 until 2010 the use of wild fish in salmon feed, not including offcuts from fish processing, has been reduced by incredible 75 percent.

If the fish used in the fish feed instead were used to feed livestock, this would have resulted in increased CO2 emissions. How much carbon dioxide a meal of fish or meat will result in, depends on how it is measured, – farm gate or sold from the retailer. The only comparable way is to compare the emission on a farm gate level.

There are many reports made that estimate the carbon footprint of different food. And no animal protein source has a lower score than pelagic fish like mackerel and herring. This is because of the efficiency of the fishing gear, purse seine and pelagic trawl. Salmon has a slightly higher emission, – but still less than two-tenths of the emissions created by cattle production, half that of pig, and a bit lower than chicken. Again, there are big variations from different productions methods. But most fisheries produce food with a lower carbon footprint than most kind of animal or poultry farms. Normally, only vegetable and cereal crops have a lower footprint. 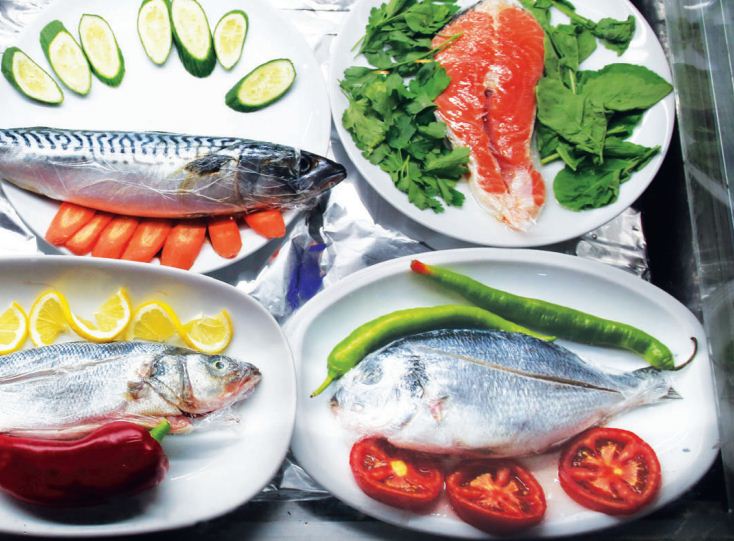 For restaurants the “size” is important. A fish display at an Istanbul restaurant displays locally farmed rainbow trout, bream and bass; and Norwegian wild mackerel and farmed salmon

Most fish is an important source of omega 3 and 6, vitamins and minerals. For many people, it is not only the main source of Omega-3 but also iodine. In some countries, elderly people are encouraged to eat fish to help reduce the chance of osteoporosis occurring. Some of the advice is the reason for further discussions. But, in general, scientists, health experts and dietarians agrees about the benefits of eating fish, especially fatty fish like herring, mackerel, trout and salmon.

The large fisheries for mackerel and herring make it possible for exporters to supply these species all year round. In Norway, the storage of live cod in pens is making it possible to supply restaurants, supermarkets and fishmongers with fresh cod throughout the year.

For restaurants, there is a need for not only having a guaranteed supply of seafood but also a need for receiving fish that fits the dinner plates. Farmed salmon, trout and Atlantic halibut are cut Norwegian seafood into portions that are perfect for dinner plates. Mackerel is filleted, making it easy to fit on the plate. The same for herring, which is often marinated and served in smaller pieces. Most restaurateurs will serve both farmed and wild fish. There is no difference in quality. But the advantage of the supply of farmed fish, of the desired size, is normally not influenced by seasons.

So, back to the question raised at the beginning of this article. What is the best choice, farmed or wild fish? There is only one good answer, – both are better than cattle, pigs and poultry if the focus is on the environment and health. Wild or farmed, – there is no real difference.