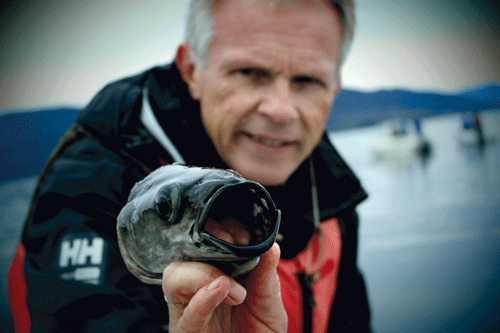 There is something fishy about two of the Research Council’s six large projects under the new strategic initiative “Digital Life.”

The New National Centre for Digital Life at the Norwegian University of Science and Technology (NTNU) received NOK 250 million this past October 2015 to run six new biotechnology projects, the largest effort in the history of the Research Council of Norway’s large-scale program BIOTEK 2021 (Biotechnology for Innovation).

The hope is that the new biotechnology center will be a “convergence for innovation” that can transform vast amounts of genetic data into concrete applications. The center’s broad thematic focus covers everything from brain functions in health and disease to microbial biodiversity. But there are also two aquaculture research projects: dCod 1.0 and DigiSal.

“The total concept is quite unique,” said Anders Goksøyr, professor of biology at the University of Bergen and leader of the dCod 1.0 project. “This is a large interdisciplinary grant that converges science concepts that have been developed over the past years, where you bring together biologists, mathematicians and engineers to get a deeper understanding of life.” dCod 1.0 will stress out cod in the lab to see what stresses them at sea.Source: Ålesund Aquarium

The University of Bergen has been granted NOK 40 million for dCod 1.0 to study how the cod genome reacts to different environmental conditions, such as oil industry activities, sewage discharge in harbors, and industrial discharge, as well as the effects of climate change and ocean acidification.

One of the concerns with cod is the elevated level of compounds in produced water from the offshore oil industry. Another is ocean acidification, which could affect reproduction and growth rates. There are even signs that the cod have started to spawn at an earlier stage because of fisheries.

“The alarm bell is that we don’t really know if it is having an affect on growth and reproduction, so there is a need to get a better picture,” Goksøyr explained in an interview. “With these tools we can get more sensitive alarm bells. We can look into the molecules of the organism and see if anything is about to happen.”

The four-year study, starting in the spring of 2016, will conduct field tests from polluted sites in Norwegian fjords and in the North Sea, Baltic Sea, Skagerrak, Kattegat and up north in the Barents Sea, where North East Atlantic cod stocks have been expanding due to warmer temperatures. The cod will be tested in vitroat labs in Bergen, Oslo, Trondheim and Gothenburg, Sweden using liver cultures developed at the University of Bergen’s Department of Biology.

The idea is to stress out the cod in the lab to find out what stresses them in the seas. One method could be genetic silencing whereby researchers “knock out a molecule” to elucidate a response. The research will have the benefit of the groundbreaking work by research partner University of Oslo, which in 2011 became the first in the world to map the entire cod genome.

“We hope to get new tools, biomarkers, that give early warning signs on pollution,” said Goksøyr. “Tools that can be used for environmental risk assessment and environmental management, which currently don’t exist now.” DigiSal will study the sequenced salmon genome to find out how farmed salmon react to novel fish feeds. Source: NMBU

Genes will also play an important part in the other Digital Life research project, DigiSal, which is led by the Norwegian University of Life Sciences (NMBU). Here, DigiSal will study salmon systems’ biology to understand how farmed salmon react physiologically to novel fish feeds, such as yeast, bacteria meal and microalgae.

“Genes are the recipe for enzymes that catalyze the biochemical reactions that the salmon body uses to convert feed into fillet,” Jon Olav Vik, researcher at NMBU and DigiSal project leader, told Norway Exports. “Therefore, there is heritable variation in how salmon respond to new feedstuffs in terms of both growth and health. This variation manifests in the physiological life processes, from molecules to tissues, organs and the whole salmon body.”

The main reason for this research is the shifting sustainability demands within the aquaculture industry, feed prices, disease and product quality. Salmon are natural carnivores, but farmed salmon get most of their diet intake from plants. This poses challenges in composing a balanced diet to ensure fish health and the nutritional value of salmon meat.

The DigiSal project will expose salmon to three types of feeding experiments: trials lasting several years based on diets that are candidates for production use; three weeks of more extreme diets to provoke clearer physiological contrasts; and laboratory culture of liver slices to study the effects of many different diets in the same fish over a week’s time.

The short tests will be done at NMBU’s fish laboratories in Ås, while the longer ones belong to the newly launched Foods of Norway Center for Research-Based Innovation and will take place at various aquaculture research stations, mostly along the western coast of Norway. Researchers will measure the effect of feed composition on health and meat quality.

The DigiSal project will use mathematical modeling and computational biology to better understand the interplay between novel feeds, genetics and physiology. This will begin a shift from a reactive to a pre-emptive research strategy in aquaculture by establishing a Digital Salmon knowledge base.

“Instead of reacting to problems only when they occur, we outline a strategy for being prepared,” Vik said. “When new challenges arise – rising feed prices, disease – the salmon farming industry can rapidly reanalyze what it already knows, identify knowledge gaps, acquire required data, and place it into context.”