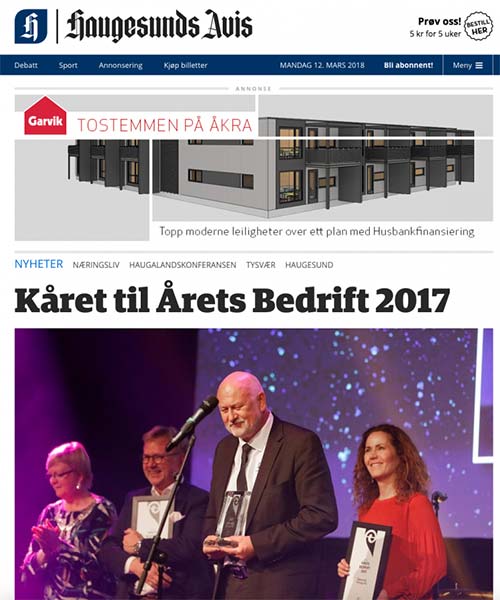 Steinsvik named “Company of the Year 2017”

Development takes time, and this company is a good example of that.

During the celebratory dinner at Haugalandskonferansen 2018, Steinsvik was named “Company of the Year 2017”. CEO Martha Kold Bakkevig accepted the award with former CEO Bjørn M. Apeland. The jury had over 50 candidates to choose from. Read the jury’s reasoning below:

“The winner of “Næringsforeningen’s” award for “Company of the Year 2017” is a business based on entrepreneurship and the ability to develop and commercialize good products. Innovation is and has been a key concept in the company’s history, and the results are now really beginning to show.

Development takes time, and this company is a good example of that. Perseverance and faith in their own ideas have been fundamental and necessary to survive, but also the conviction that it is actually possible to compete internationally from a small place in the South West of Norway.

It is tempting to use the expression “having the world at your feet”, but a company from Haugalandet, which now has become much bigger out in the world compared to home, and which has taken root in all corners of the world, deserves some swelling words.

With a good economic and technological foundation and a market that just seems to grow, opportunities for continued expansion both at home and abroad should be present. Even though the entrepreneur himself has left to concentrate on other projects in the region.

The jury wishes good luck and names Steinsvik Group Company of the Year 2017”!