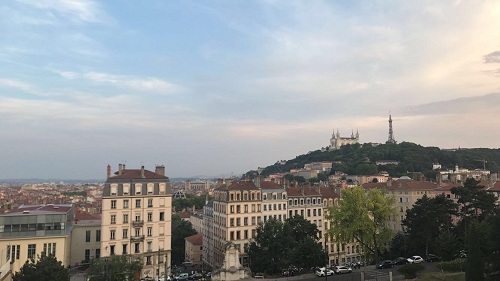 Silicones and the French way of life

Moving from Norway to France without knowing any French..

In April, I moved from the small village Svelgen, to one of the largest cities in France, Lyon. This was in itself a big change, but also the production and the language was completely different.

For 6 months I worked at Elkem Silicones’ R&D process department in Saint Fons where I was working on a scale-up project for devolatilization of high viscous silicone oils. This simply means to remove volatiles from the silicone oil by reducing pressure and increasing temperature. Here, I started out doing trials in small laboratory scale and ended up doing trials in a large pilot scale. This is part of a large project to reduce certain volatiles from silicone oils more efficiently on an industrial scale. As a materials science engineer, this was a quite new field of study for me and I was able to learn a lot about process engineering. It was also great to get to know one of the most recent additions to Elkem, the Elkem Silicones division. Moving from Norway to France without knowing any French and with a certain cultural difference is definitely interesting. The first cultural difference I met, was seen instantly when I got to work in the morning. For French people it is polite and the social norm to go around the office and greet all your colleagues with a kiss on each cheek, or “bises”, every morning. For a person that has never done this before, it feels strange and it is also difficult to know who to kiss and who to give a handshake. It took some time to get used to, but eventually I now find it a nice gesture. I think we have something to learn from it in Norway, where we usually barely say “good morning” if you pass someone in the hallway. Luckily, I had great colleagues that taught me everything I needed to not look like a fool in social settings (I hope).

Lyon is not only a city of food, it’s also a city with a lot of history since the city was founded already in 43 BC. On the hill of Fourvière you can find old ruin of theatres from the Roman times and on the foot of this hill, the district Vieux Lyon (English: Old Lyon) is located. This part of the city is one of Europe’s most extensive Medieval and Renaissance neighborhoods. This makes walking around in Lyon a great and beautiful experience with so many things to see and explore. I can really say that Lyon is worth a visit!

Now I am back in Norway, where I will work for the Foundry division with multivariate analysis on electrode operation. So now all that’s left to say is; thank you for having me Elkem Silicones and France! It has been an amazing experience!
A bientôt !