Eimskip has decided to add Portland, Maine as a port of call in the end of March 2013, replacing the port in Norfolk, Virginia. The main objective of this change is to shorten transit time between North-America and Europe and...

In 2011 Eimskip added a new route to its sailing system to connect North-America to the North of Norway. The market has embraced this new shipping route that has opened new markets for Eimskip customers in the North Atlantic.

The main reason for Eimskip choosing Portland as port of call is that it is well located for Eimskip´s liner system in the North-Atlantic and suitable for the needs of the company’s customers. The port is well equipped to handle the operation and has been renovated during recent years. Eimskip will operate a warehouse and an office in Portland and the terminal is equipped with 150 reefer plugs, a 100 ton mobile crane and other equipment required to serve Eimskip and its customers.

Portland has for decades been a center for the seafood industry and various other industries.

Eimskip will continue to receive less than container load shipments (LCL) in Norfolk, and New York as well as opening a new warehouse in Portland, Maine.

In 2009 Eimskip withdrew one vessel from its North-America services. This was done to meet the recession in volumes in the North-Atlantic. In 2011 Eimskip added a vessel and began sailing from the North of Norway to Boston, being the first containerized shipping company to cross the Arctic Circle with regular port call in North-America. The new vessel has gradually been increasing volume and revenue.

The new route will as well create new opportunities for Eimskip’s customers to transport goods from the US to Newfoundland with a biweekly short sea service with a three day transit time.

Eimskip runs a network of 49 offices in 17 countries and operate 17 vessels.  Total number of employees is around 1.320. 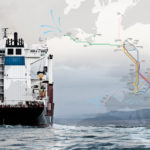