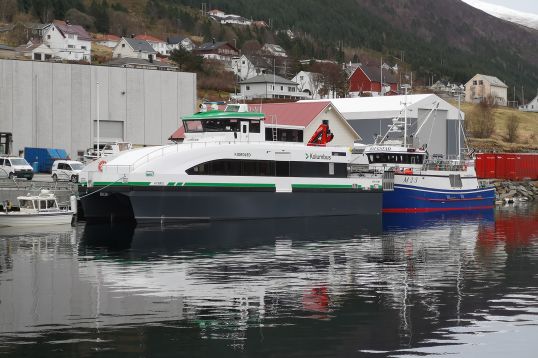 The first ever HDE 220 gearboxes from Servogear play an important role, when the 86 pax fast-ferry ‘Fjordled’ enter operation for Norledon the shores of western Norway in April 2019.

The Servogear and Brunvoll Mar-El developed plugin hybrid propulsion system, integrate renewable energy charged batteries and an electric motor in the traditional power system on board.

– We are happy to see ‘Fjordled’ in operation and it is a milestone for us to deliver our first Servogear Ecoflow PropulsorTM – Hybrid package including the new HDE 220 gearboxes. With our long-term partner Brunvoll Mar-El we were able to develop and deliver a state-of-the-art propulsion package with unbeaten performance in terms energy efficiency, Servogear CEO Torleif Stokke states.

By extensive use of new technology Norled enable this Zero-Emission-In-Port vessel to reduce NOx-emissions with up to 80 per cent, compared to the previous vessel used on the connection. It will also have lower emissions of greenhouse gases. In addition to a propulsion system with market-leading energy efficiency, it utilizes the most modern exhaust purification system.

The HDE220 plugin hybrid gearbox has the same footprint as the renowned HD220 gearbox.

In normal operation ’Fjordled’ will use its’ diesel engines for the transits to the remote island of Røvær and electric propulsion in port areas. The vessel is another step toward zero emission passenger transport at sea and was built by Norwegian shipyard GS Marine.

Norled will operate the vessel for Kolumbus on the Haugesund – Røvær – Feøy connection for the next 10 years. An identical conventional vessel called Fjordøy will be equipped with the same propeller system and gearboxes. It is ready to be upgraded to a full hybrid system at a later stage.