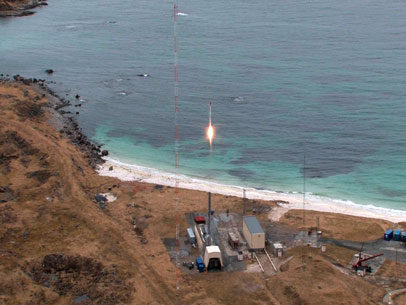 Verberne believes that Nammo’s technology can affect both safety and the environment. “They are inherently much safer, the thrust level can be controlled and both the constituents and the exhaust gasses are predominantly environmentally safe,” he says. “Nammo has already flown one experimental rocket from Andøya and is preparing for a series of experimental flights with an educational rocket this fall. Nammo has also been tasked by ESA to study the applicability of this technology for the next generation of Space Transportation.” The European Space Agency (ESA) is the authority behind the Ariane 5 expendable launch system. With several forthcoming flights planned during the course of 2009, Norway is again proving itself as a fundamental technology supplier with a number of high-profile contracts. Amongst the Norwegian companies involved in the Ariane programme is Norspace, which supplies electronic products including, in this case, 586 Level Conditioners, which form part of the rocket’s fuel level measurement systems.

In February, Kongsberg Defence & Aerospace, which has also been a significant equipment supplier for the Ariane programme over a number of years, signed a contract with EADS-Astrium of France worth around 120MNOK. Kongsberg’s attachment and separation mechanisms transfer thrust from the boosters to the main stage of the Ariane 5 carrier rockets. Noted for their reliability, Kongsberg will provide equipment for 35 booster rockets before 2014. The boosters burn 230 tonnes of fuel in the course of two minutes, then separate from the main stage of the carrier rocket. The separation itself takes just 5 milliseconds.

Nammo recently added to its growing reputation by signing the single largest contract in the history of the Norwegian space industry, worth 150MNOK. The company will deliver 700 rocket motors covering Separation Boosters (FE), Acceleration Boosters (FA) and Safe & Arm devices (BSA) for Ariane 5.