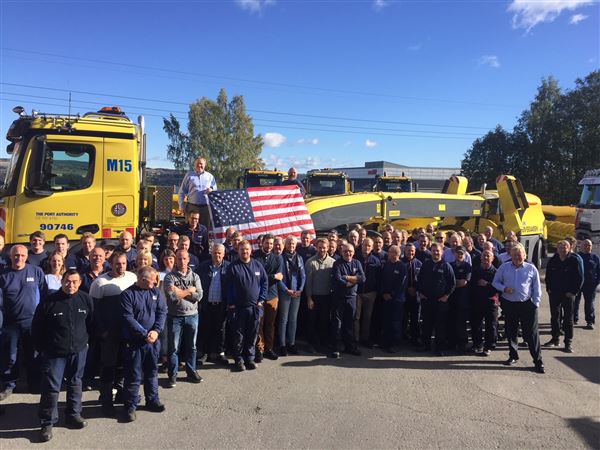 Last week Øveraasen delivered machine number 66 to the Port Authorities of New York and New Jersey. This unit represents the last machine under the largest contract in the 110 years history of Øveraasen. Totally over the last ten years, the New York based customer has taken deliveries of all together 108 RS 400 Runway Snow Sweepers from Øveraasen. The deliveries of the last 66 units have followed exactly the plans which were put together at the time as the contract was signed. The feedback from the customer is very positive and the units will now be put into operation already this winter. The machine are split between JFK, La Guardia, Newark and Teterboro airports. All of them operated by the PANY&NJ. The completion of the last unit was celebrated internally at the company and Thor Øveraasen expressed, in his speech, his thanks to all the employees who have contributed to the success of this large order. The huge cakes which were covered by a photo of the RS 400 and the American flag was a main attraction during the celebration.

We hereby like to wish the PANY&NJ a lot of snow and rough winters in the years to come!