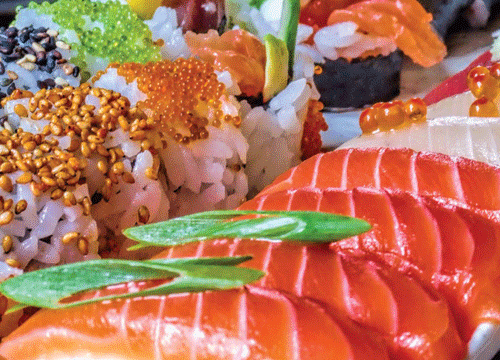 Norway exported 2.6 million tonnes of seafood 2015. That represented more than 11 billion main courses. But the number of meals containing Norwegian seafood is possibly in the order of more than 20 billion. Seafood is often considered an expensive...

In 2014, The Norwegian Seafood Council presented estimates indicating that an average of 31 million meals with Norwegian seafood included on the ingredients list were served daily. This equals 11.3 billion meals per year. Northern Seafood has looked deeper into the numbers, and can present estimates for the number of meals for the most important seafood species exported from Norway. Our estimated total number of meals globally are slightly lower. But we have only included exports, not seafood consumed in Norway.

Most surprisingly is the fact that the average cost of the Norwegian seafood in main course meals last year only costed on average EUR 0.75. This was based on the average exchange rate last year of NOK 8.93 to one Euro. The Norwegian currency has since weakened further, but the price of some fish species has increased during 2015 and were more expensive in January of this year, than the average price per kilo last year.

As the Norwegian currency continued to decline against most other currencies during the second half of 2015 some seafood products were lower priced in foreign currencies, despite the price having increased in Norwegian krone.

Last year salmon had an average price of EUR 1.03 for one portion (200 gram edible meat). In January, the price was EUR 1.21, an increase of 17.5 percent.The Norwegian FOB price of salmon was, on average NOK 57.93 in January this year. The average price last year was NOK 46.09, an increase of 26 percent. The 8.5 percent price increase was absorbed by a weaker Norwegian currency.

There is harly any large fish market or supermarket in the world not offering seafood from Norway.

Another question is: – Is the raw material cost of one portion of salmon at EUR 1.21 high?This is not the price paid by the end consumer. But the costs involved from transport, import duties, distribution and handling at the retailers, still mean it is possible to buy salmon in supermarkets in most countries at a price of less than EUR 2.50 per portion.

Salmon has an exclusive image, but hardly a price reflecting the exclusive image. Atlantic cod is a sought after fish which is regarded with high esteem in many markets. But it does not have the same globally exclusive image as salmon. Still, cod has a higher return pay than salmon. Not per kilo FOB for gutted fish,- but per portion of 200 grams of edible meat served on a plate.

Salmon is higher priced for gutted fish, but the meat yield is much higher than for cod. This makes salmon cheaper per portion than cod. The average cod portion cost 1.44 EUR last year. In January 2015, the price fell to 1.38, closing much of the gap between cod and salmon. Nice cuts of semi dried salted cod, – clipfish. This was one ofvery few fish species increasing in price in most markets last year.

If measured as cost per portion mackerel and herring are two lower priced species. In a main course the average cost last year of mackerel was EUR0.30 FOB Norway. In January this year the price was EUR0.29 per portion.

It can be argued that it is not possible to know the true price per portion of a fish. And that is true. We have there for only estimated the price of a standard portion of fish as served in European restaurants. Depending on the fish species, these portions vary between 150 and 200 gram of edible fish meat.

As there is a market for dried cod heads, frozen salmon heads and backbones, salted herring tidbits, cod roe for use as a sandwich spread and so on,much of the fish is not sold in manner that makes it possible to convert to standard portions. And in fact, if all meals were Norwegian seafood and if only one of the ingredients counted, the number of meals containing Norwegian seafood may be above 25 – 30 billion per year.

At least 400,000 tonnes of Norwegian salmon are used for production of 250.000 tonnes of cold smoked or marinated (gravlax) salmon globally. One serving of these products is usually around 50 grams. This equals 1.6 kilos of gutted salmon needed to produce one kilo of smoked salmon. Therefore smoked and marinated salmon represents approximately 5 billion meals. Not main courses, but meals where salmon is consumed as a starter, pizza filling, sandwich fillings, canapes and so on.

Sushi is a food trend growing in popularity worldwide. Norwegian salmon is possibly the most common fish in a sushi meal. But very few sushi lovers will consume 200 grams of salmon at one meal sitting. Very few kinds of sushi will have more than 12 – 14 grams of salmon, – most will have far less. So if eating as an example ngiri sushi, a normal serving of 8 ngiri contains around 90 –130 grams of fish. Most people will not eat just one kind of fish, but a mix of different seafood. A normal ngiri meal with two or three ngiris covered with salmon contains less than 40 grams.

Therefore, the number of sushi meals containing salmon is enormous. There are, according to different estimates, between 80,000 and 110,000 sushi restaurants and take-away outlets in the world. In addition, sushi is part of the menu in many restaurants and also sold in supermarkets worldwide. It is a fact that sushi alone, represents some billion meals containing salmon annually.

The estimated number of 11.2 billion meals, used at the beginning of this article, illustrate the number of meals if all seafood exported from Norway was consumed as standard size main meals. The number of meals eaten, containing Norwegian fish, is nearly impossible to estimate. But it is definitely more than 20 billion.