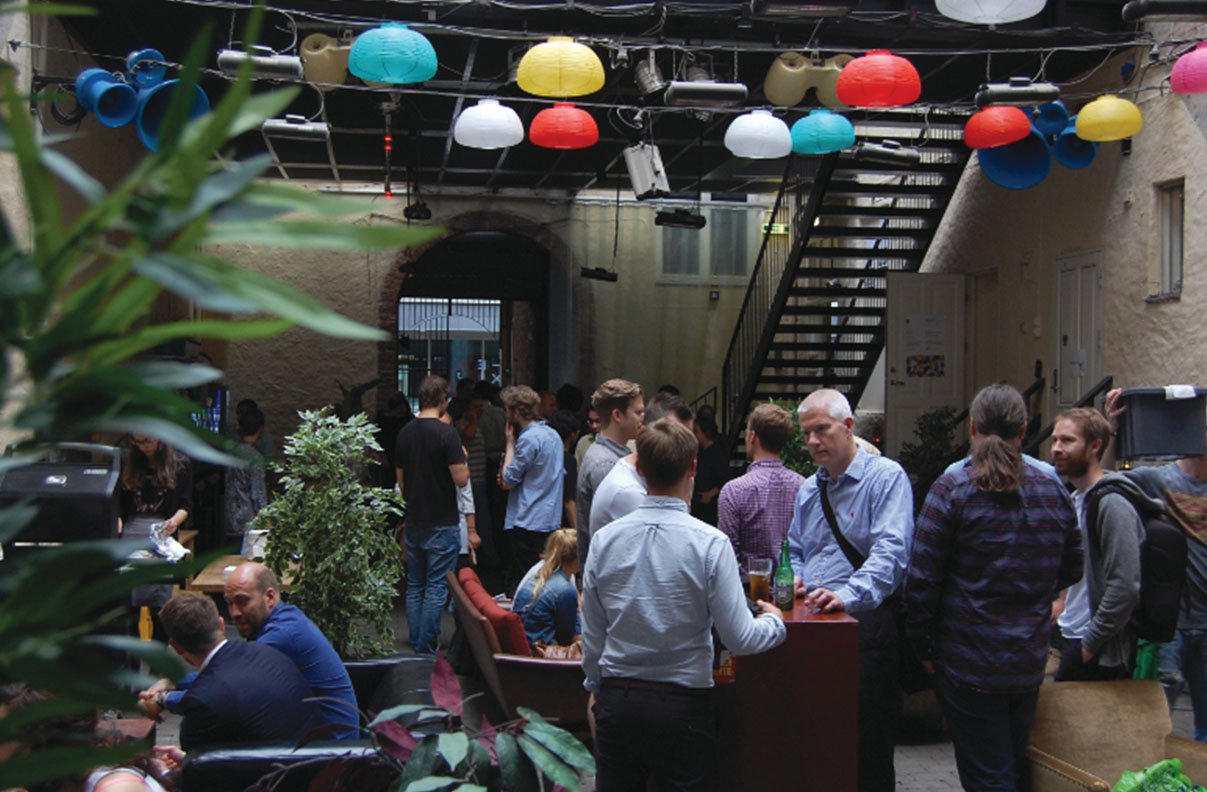 MESH was co-founded in February 2012 by two young Norwegian entrepreneurs Anders Mjåset and Audun Ueland. It began with just 15 IKEA desks and 15 friends that wanted to work together in the 200 square metre space in downtown Oslo. Thomas Bergøy Johansen, a college friend, later started the hip WiFiMESH Café downstairs in May 2012 and the trio gradually expanded MESH into the entire multi-story 2,500 square metre building nestled in between Oslo City Hall and the prestigious boulevard Karl Johans Gate.

“After a couple of months, we had 60 people knocking on our door and asking if they could sit with us,” says Johansen, MESH chief operating officer.

The inspiration came a year before after Mjåset had travelled to parallel start-up scenes in Silicon Valley, New York, London and Berlin. He realized that something was missing in Oslo and founded MESH. It was meant to be a similar place to its international peers where entrepreneurs could share ideas and costs. It was the first of its kind in Norway at the time.

“(Anders) found out that their way of innovative culture was very different than Norway’s,” said Johansen. “It was easy there to find and join networks. The international hubs were 5-10 years ahead of Norwegian culture.”

The idea was so successful that MESH has exploded to around 140 members in its co-working pace spread among three floors. They are constantly expanding their membership base. The idea is to have about 70% real startup companies in their working space and 30% creative thinkers, everything from app and tech product designers to architects and clothing designers.

Most of its members are “Flex Part.” They pay NOK 1,190 per month to share an open desk landscape nine days a month in the trendy brick-exposed design space, and have access to all the member rooms, such as MESH Café, nightclub Seeds, and newly establish lounge donned with chandeliers for meeting high profiled investors. Members can also avail themselves to the constant event happenings – there are about three per day –like the “Hackathon Conferences” co-sponsored by MESH partner Microsoft.

FixedDesk full timers pay only NOK 2,890 per month, a quite reasonable rent in the high cost capital of Oslo. One of these is Klaus Bugge Lund, a founder behind Justcoin, a trading exchange for Bitcoins. His brother Andreas Brekken developed the online currency platform in 2012 in the hopes of tapping the growing demand for the virtual coin. Since the website went live in May 2013 it has accumulated 15,000 registered users and handles NOK 15-20 million in trading per month. It’s the largest Bitcoin exchange in Scandinavia and one of only around 15 worldwide. Justcoin charges the same 0.5% commission as their competitors. But their edge is that they provide a stable platform in Norway, which is seen as a safe haven for investing. Only one out four Justcoin’s users is Norwegian. “You try and buy Bitcoins from those who won’t scam you,” says Lund.

Downstairs on the first floor there are about 64 members in MESH’s Maker Space. Run by Kriszti Tóth, one of the MESH’s initial members, it’s a place where creative talents can come together in a workshop and build prototypes. There is a bookbinding machine, laser cutter, sewing machine, and even a 3D printer. Here Swedish engineer Thomas Läräng is in the process of designing a Variable Neutral Density filter Holy Manta that can be placed in the camera lens. It’s more convenient than fiddling with many lens cover filters and can dim the lighting without altering the depth of field.

Upstairs on the third floor sits a room full of flex members, who share an open working space underneath slanted roof ceilings and brick-exposed walls and heating ducts. Stine Liland Nysæther, community builder at Startup Norway, has been occupying a desk there for six months. She sits for short periods at different startup scenes, most recently the Norwegian startup accelerator group betaFACTORY, modelled after Y Combinator and Tech Stars in the US. She helps connect entrepreneurs through Startup Weekend events in Norway and navigate the expanding start-up ecosystem.

“It’s growing rapidly,” said Nysæther. “Just in the last year and half, we’ve gone from one to 7-8 working co-working places in Oslo, there is a new one in Trondheim, and there are exciting things happening in Bergen and Stavanger.”

Launched in 2011, Startup Norway has 400 registered members in its database, but gets about 3-4 new startups every week. It has held 15 Startup weekends in Oslo, Bergen, Stavanger and Trondheim. The event will eventually be expanded to the northern Norwegian city of Bodø and host Startup Summer for the fourth time in 2014.

One of its most recent success stories was a meeting between four guys in Oslo at Startup Weekend. Through an impromptu collaboration, they ended up in just a few days inventing a new dating app called Blink (http://getablink.com). It was recently picked up by betaFACTORY’s startup accelerator program, which gives companies funding and mentorship to develop their products.

But Startup Weekend Norway’s biggest success story ever was the creation of Soundrop (soundrop.fm) a social music discovery app. The company recently closed a USD 3.4 million funding round led by technology investment partnership Northzone and Investinor, a Norwegian investment company backed by the Norwegian government. It is regarded as the first and only real-time, cross–platform social music service.