Norway may not be the world’s biggest space nation, but it is certainly one of the most unique. Building on historical knowledge across a range of industries, Norway is of fundamental importance to the European Space Agency (ESA) and provides...

There is more than scientific curiosity at stake: climate change is one area that can be closely monitored from the high north. Projects such as CryoClim, administered jointly by the Norwegian Space Centre (NSC) and the ESA, help scientists map out the effects of global warming where they are most keenly felt: at the poles. CryoClim gathers data from satellites including the ESA’s ENVISAT. “Norway knows a lot about snow and ice,” says the NSC’s Marianne Moen. “Therefore we have got involved in these areas of GEOSS. The aim of the project is to make maps and an overview that shows the development of sea ice in the Arctic over long periods of time. Eventually, the aim is to develop long series on sea ice,snow quantities and glaciers, but at the moment sea ice monitoring is the only service available,” she adds. 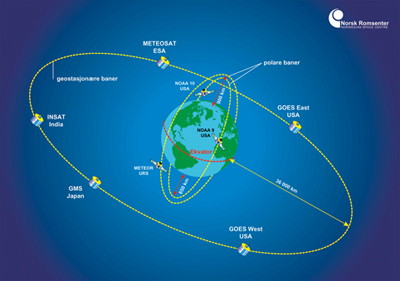 Satellites in orbit around the earth. Norway’s polar ground stations are important for current and future surveillance satellites. © NSC

Norway’s reputation as a leader in the satellite surveillance field is cemented by two new projects: the new European system for satellite navigation, Galileo, and an exclusively Norwegian surveillance satellite, AISSat-1, which should be launched towards the end of 2009 at a cost of more than 30MNOK.

The polar orbiting nanosatellite AISSat-1 is being developed in Norway and constructed by Canadian UTIAS/SFL. New technological advances mean that the satellite will measure just 20cm x 20cm x 20cm. For the Norway’s northernmost waters, it could provide dramatically increased safety and wider coverage – potentially defining for the maritime industry. Currently, AIS (Automatic Identification System) transponders are required on all vessels over 300 tonnes. These broadcast information including position, speed, course and cargo, which are picked up by the Norwegian Coastal Administration (NCA) when they approach the shore at a distance of approximately 40 nautical miles. The purpose of AISSat-1 is to aid research into the further development of space-based AIS systems, and the integration of information into ground-based maritime tracking systems.

AISSat-1 is funded by the NSC, and managed by the Norwegian Defence Research Establishment (FFI). The Kongsberg Group – Kongsberg Seatex AS and Aerospace AS and Kongsberg Satellite Services AS – will provide important elements from the payload itself to the ground stations.

This role is also recognized by the EU, whose ambitious Galileo project, consists of 30 satellites, together with other technology designed to improve the accuracy and security of navigation. Norway, with its key competences in this field, will provide key research and technology. Galileo can be used together with the American GPS, Russian GLONASS, and the planned Chinese system, Beidou. The relationship is mutually beneficial; Norway will utilize improved satellite coverage in northern areas as they relate to the fishing and maritime transport industries, as well as the obvious boost to industries contributing specific technology.The benefits of Galileo include a potential increase in accuracy from 5-20 metres to 1–3 together with GPS. Furthermore, the availability of a backward channel that will allow feedback about the receipt of emergency distress signals will benefit sea rescue. Land-based emergency services also gain quicker response times and more accurate information.

Norway’s contributions are based on the initiative of the NSC. Kongsberg Seatex, which also supplies AISSat-1, is a major service provider, together with Norspace and a range of other subcontractors. Norspace will provide a frequency generator for Galileo’s first four ordinary satellites to be launched in 2010. Future deliveries to the other satellites could top 200MNOK. Norspace’s generator will convert navigation signals into radio frequencies for ground stations, and will be placed inside the sophisticated housing of another Norwegian supplier, Prototech. Kongsberg Seatex are contracted to deliver advanced navigation and positioning systems for the maritime and offshore sectors, and “Galileo Sensor Stations” – ground stations monitoring Galileo output from locations around the world.

Norway’s national space agency acts to co-ordinate the industry and to support its contributions to the ESA’s programmes. The NSA’s influence and expertise encompasses companies, educational and public institutions and organizations. The centre performs an important role in assisting Norwegian companies to win contracts and increasing potential exports to the ESA, and also administers Norway’s membership role. The Centre can provide funding, networking opportunities and act as an advisory body. It is estimated that, every year, 30 to 50 Norwegian companies provide products, services and technology to the ESA.

The Norwegian Space Centre focuses particularly on satellite-based earth observation, satellite navigation and communication, and research – especially in the sun/earth research field. The NSC also has a 90% share in the Andøya Rocket Range and, through Norsk Romsenter Eiendom AS, 50% of Kongsberg Satellite Services AS.