Norway enters into climate and forest collaboration with Vietnam

"Vietnam's economic growth over the past few years has been impressive, and the country has become a significant political actor in Asia. Vietnam is also one of few developing countries with concrete plans to significantly reduce greenhouse gas emissions by...

Vietnam plans to reduce emissions by 20 per cent by 2020, by reducing emissions and increasing carbon sequestration in forestry and agriculture by the equivalent of 1.371 million tonnes of CO2e.

With its location in the huge, low-lying Mekong Delta, Vietnam is one of the countries of the world that is most at risk of the consequences of climate change. This represents a threat to the country’s continued economic growth and social development. Vietnam is the world’s second-largest rice exporter, currently feeding 100 million people beyond its own borders.

“When forests disappear, so does nature’s own buffer against climate change. Rising sea level, erosion and salt water intrusion as a result of climate change would have catastrophic consequences for Vietnam’s ability to produce food and, indeed, for the whole region”, minister Solhjell said.

Norway has supported Vietnam’s preparatory efforts against deforestation since 2009, through the UN-REDD Programme. Vietnam is one of the countries that has come furthest in their preparations, and has shown great interest in participating in the planned REDD mechanism under UNFCCC. Vietnam makes a constructive contribution to north-south dialogue in the climate negotiations.

“We wish to show countries that make an extra effort that we fulfil our climate finance pledges. With this collaboration, Norway wishes to support Vietnam’s continued efforts to reduce emissions from deforestation and forest degradation, including measures to protect the natural forests and unique biodiversity by controlling illegal logging, improving forest monitoring and involving local communities” Solhjell said.

The collaboration initially covers support of NOK 180 million through the UN REDD Programme for capacity building and institutional development in Vietnam’s second phase of preparations. As part of the agreement with Norway, Vietnam shall also involve women, ethnic minorities and local communities in forest monitoring, and introduce measures to combat illegal logging and trade with its neighbouring countries.

“Parallel to protecting the forests, it will be important to Norway that Vietnam moves in a positive direction in terms of transparency. This includes the strengthening of democratic rights and human rights. It is important that local communities are involved in forest governance”, said Solhjell. 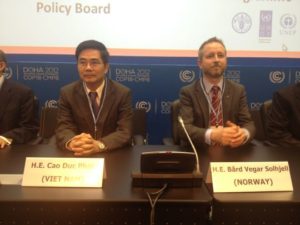