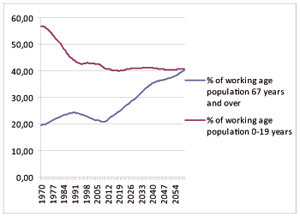 In September 2009, John Bernander became the new Director General of the Confederation of Norwegian Enterprises (NHO), Norway’s main employer union. He takes over at a time of relative prosperity for the country, which has emerged from the financial crisis...

In September 2009, John Bernander became the new Director General of the Confederation of Norwegian Enterprises (NHO), Norway’s main employer union. He takes over at a time of relative prosperity for the country, which has emerged from the financial crisis relatively unscathed. That did not stop him from taking up a crusade for better productivity and weaning the country off its dependence on its oil wealth through what NHO calls smarter growth.

The Dilemma
Norway is in a unique position. The country has the second largest GDP per capita and ranks as the number one place in the world to live according to the UN Human Development Index. It has no budget deficit, 3% unemployment, and NOK 2.6 trillion (USD443 billion) tucked away in Norway’s Government Pension Fund Global from investing its petroleum revenues for future generations.

But the country is at a crossroads. Like many others, it is facing a growing proportion of the elderly in its population who will be leaving the workforce and start tapping into social security benefits. Between 2010 and 2060, the number of people aged 67 and over will almost double, representing at the end of the period 40% of the working age population, according to the OECD.

The country also faces the problem of declining oil production, which is the basis for the bulk of the government’s revenues. Output has fallen by circa one-third since the peak in 2000-2001. Moreover, fewer students are majoring in science studies and more people have left the workforce to go on social benefits, such as disability and rehabilitation.

In short, the country will be faced with the conundrum of less people having to produce more – without working harder – in order to keep up Norway’s high living standards. The solution: smarter growth.

Productivity is Almost Everything
“Paul Krugman said productivity is not everything, but in the long run it is almost everything,” said Bernander in his NHO annual address. “The way I interpret it, it means that in the long run we can only live off of companies that create profits and not off of those who had to survive on subsidies. For this to happen, we have to work even smarter and there is a clear challenge that awaits us.”

Bernander launched the call for smarter growth at his first NHO annual conference as Director General in January. He is in many ways the perfect candidate to take up the polemic. He has a background in both politics, as former Deputy Leader for the Conservative Party and the State Secretary in the Ministry of Industry, as well as from private industry. He left a job as partner in Kristiansand-based shipping company Mosvold Shipping to head NHO. Prior to that, he was Chief Executive of Norwegian Broadcasting Corporation NRK.

Part of the impetus for the focus on smarter growth was the financial crisis, according to Espen Søilen, NHO Internationalisation and Economics Director. Although Norway was not as affected by the crisis as others, the country did experience a larger percentage of people employed in its public sector, such as hospitals and research, compared to the private sector. This shift towards the public sector led to a decrease in total productivity measured by capital, labour, and competence.

The public sector accounts for one-third of value creation in Norway. The OECD has been critical of Norway for having one of the highest shares of public spending in mainland GDP in the OECD and for its spending inefficiencies in education and health care. Norway’s government service production is 27.5% of mainland GDP compared with an average of around 20% in the OECD area.

“The sheltered sector and the public sector do not have the same external pressure, but the need for improvements and productivity are as important here,” said Bernander. “The key must be competition between the various players to solve a wealth of different public service tasks.”

Spending Less & Wisely
Public sector reform is just one of several ways to achieve smarter growth, as outlined by Bernander. There is also a need for increased investment in future-oriented skills and more active and engaged owners. But the most important way towards smarter growth he said is a return to the 4% spending rule, the annual return on the Government Pension Fund that the Government is supposed to use as a spending guideline for its fiscal budget.

The spending guideline prevents the Government from stoking inflation and helps control the growth of its public sector. The Government has recently deviated from the 4% guideline and spent more in its 2009 budget in order to mitigate the possible effects of the financial crisis. However, Norway needs to gradually withdraw its fiscal policy stimulus and return to the 4% guideline if it is to avoid a higher exchange rate and adverse consequences for exposed industries, and to help meet ageing costs, according to the OECD.

“It is a difficult political message to send in a country that has over NOK 2500 billion on its books, but nonetheless it is necessary both to be able to tighten oil spending and create new and smarter growth,” said Bernander.

“Our problem from NHO’s side is that we are pointing out these problems, as is the OECD, the Norwegian Finance Minister and Prime Minster Stoltenberg, but nobody is doing anything because the majority of people don’t think this is a serious problem that warrants unpopular tactics,” said Søilen. “We have a veil of oil money between us and reality.”