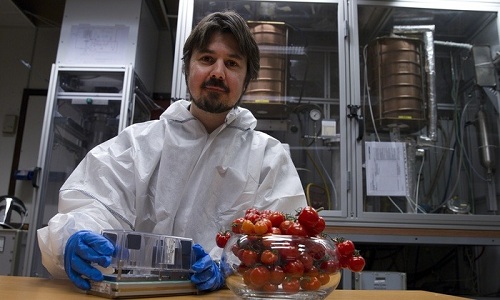 We are building chambers for tomatoes to grow in space. The aim is to give food to astronauts going to Mars.

Project manager Bjarte G. B. Solheim CMR Prototech will do research here on the Earth to find a good technical solution for producing food in space. (Photo: Rune Nilsen, BT)

TIME SCALE is a three year research and innovation project (2015 – 2018), developing next-generation technology and concepts for life science research in space, with applications also for the land-based greenhouse industry. The project is funded by Horizon 2020, the EU framework program for research and innovation, through topic Compet-07-2014, Space Exploration – Life support. Prototech AS has designed and manufactured the breadboard version of the Plant Cultivation Chamber. This chamber will be used for plant cultivation during the ground testing of the TIME SCALE equipment.

It started already in 2005. CMR, through our subsidiary Prototech AS, was involved in the MULTIGEN-1 project. The objective of this project was to find out how plants behave in weightless conditions. In addition to study whether the seeds the plants produced were viable, the project also wanted to solve a riddle unanswered since Charles Darwin; does the fact that almost all plants grow in spiral patterns have anything to do with gravity? To find this out, sophisticated equipment was required, which is why Prototech started developing the world’s most advanced flowerpot.

This was an ‘intelligent’ flowerpot. The plant grew inside a closed system, and being in space, the effect of gravity can be eliminated. The flowerpot itself was no bigger than a milk carton, and thanks to extremely advanced mechatronics it was possible to control light conditions, as well as air and water supply. Furthermore, gravity can be simulated when necessary. It has all been designed to provide optimal growth conditions as accurately as possible.16 of these special constructed flowerpots were produced.

Now we are going on with potentially tomatoes, lettuce or corn salad. Building new equipment for them. The vision is to produce food in space, allowing us to embark upon journeys to more distant planetary destinations. CMR Prototech is the Technical coordinator for a consortium of European institutions and companies developing the successor to the plant cultivation chamber and its supporting systems through the EU H2020 programme. An advanced breadboard that allows for larger crop plants with greatly improved plant health monitoring and water nutrient systems is being developed.

TIME SCALE is a three year research and innovation project (2015 – 2018), developing next-generation technology and concepts for life science research in space, with applications also for the land-based greenhouse industry. The project is funded by Horizon 2020, the EU framework program for research and innovation, through topic Compet-07-2014, Space Exploration – Life support.

The acronym TIME SCALE refers to the project title Technology and Innovation for development of Modular Equipment in SCalable Advanced Life support systems for space Explorations. The project involves eight consortium partners from six European countries, including small and medium sized enterprises and universities. This cooperation is complemented by a Scientific Advisory Board (SAB) with members from USA, Canada, Germany, Norway, and Sweden. TIME SCALE