At long as any one can remember, enormous schools of cod have been migrating south from the Barents Sea to the Lofoten region in northern Norway to reproduce. According to historical records, Othere – the Norse navigator and explorer of...

This dried cod would become known as stockfish – with good reason – it can keep its high quality and stay in stock for nearly a decade. This fish became the food stock of Norwegian explorers, and it is quite likely that Othere and other Norse adventurers were part of a network of traders that spread the legend of stockfish throughout Northern Europe. Some say that this dates even back as far as the year 793, the time of the Viking raid upon the Lindisfarne monastery on the northeast coast of England. 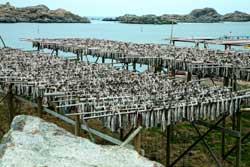 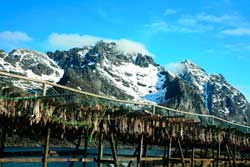 Legend has it that stockfish dates back as far as the year 793, the time of the Viking raid upon the northeast coast of England.

In Balance with Nature

Norwegians pride themselves on tradition, adaptability, and living in balance with nature. Perhaps no other area typifies this as much as the Norwegian seafood industry, where a balance and understanding of nature are keys to success. Stockfish and clipfish each have a unique status in both the history and the export activities of the country. Both types of fish are made from cod, the main difference being that clipfish is salted, the word “clip” coming from the Norwegian word for “rock by the waterside” (“klepp”). Clipfish has its name from the time when the fish was dried in the sun while laying on the clips. An export product for centuries, clipfish has meant a great deal to the country, both economically as well as culturally. In fact, as far back as 1814, fisheries were called “Norway’s most important gold mines”. 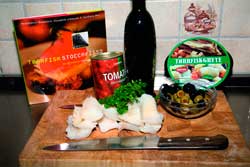 According to Querini, “When it (stockfish) is eaten…butter and spices are added for flavour.” © NSEC

The Italian connection to stockfish is an interesting one, and has been well documented within literature. Pietro Querini was an Italian nobleman and merchant from Venice, stranded in January 1432 on the uninhabited island Sandøy off Røst in Lofoten and eventually found by Norwegian fisherman after several weeks. Querini and his men stayed in the care of the local population for several months, during which time they were able to observe the yearly preservation technique of stockfish.

According to Querini, “They dry the stockfish in the wind and sun, using not salt, and as the fish contains little moisture or fat they become dry as wood. When it is eaten…butter and spices are added for flavour.” He saw them dry the stockfish outside without salt. They used the stockfish for trading instead of money. Soon it became the most important trading product. Pietro heard about the trading in Berge (Bergen), and in May they set off with a ship loaded with 50 barrels of stockfish. Thus, the century long romance between Stockfish and Italy began. 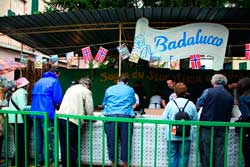 Countries such as Brazil, Portugal and Italy have made the different variation of stockfish and clipfish an integral part of their society. Very few indicate their passion for stockfish stronger than the population in the small village Badalucco in the Imperia-province, north of Genova. Each and every September the entire village takes part in an enthusiastic stockfish feast called “Festa del Paese.” The Norwegian national anthem is traditionally played while the village’s inhabitants march in honor of the dried fish. Everywhere in the village, for a day and a night, the Italians praise the wonderful stockfish from Lofoten. “Viva Lofoten!” 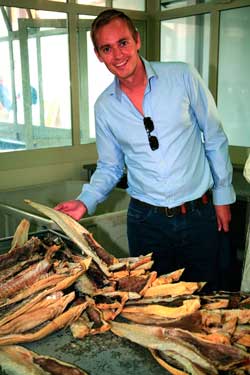 The close cultural heritage and connection that has arisen as a result of stockfish and clipfish goes far beyond Italy to Africa, South America and other parts of the world. © NSEC

The close cultural heritage and connection that has arisen as a result of stockfish and clipfish goes far beyond Italy to Africa, South America and other parts of the world. This cultural connection often has a very personal effect on people. Iris Sitalsing grew up in Surinam on the northeast coast of South America. As a child, she eagerly looked forward to her mother going to the fish market and bringing home the dried fish products that were used in the traditional family recipes. Now Iris lives in the Stavanger area of southwest Norway and continues her long-time romance with Norwegian seafood that was first brought to the region by the Spanish on their journeys long ago.

In Tune with Nature

Lofoten Viking is a company situated beneath the cliffs of Værøy, a historical area where many Viking burial grounds have been discovered. Here, the midnight sun can be seen for well over a month each summer, setting the stage for a business that is both successful and keeping with the traditional values of Norwegian seafood industry. Located near rich fishing grounds, Lofoten Viking’s products are based on raw materials and export a wide range of fresh and frozen fish, stockfish, and different herring products, both marinated and frozen. The company website reflects the cultural importance of stockfish, with information available in English, German and Italian. 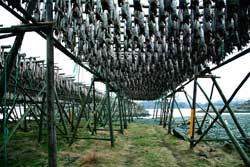 The unique combination of natural elements and the purest of fish gives Norwegian stockfish and clipfish a global reputation.
© NSEC

Many companies that reinforce this connection with the international environment, and include Breivikbotn Fiskeindustri, a company in the northern Norway region of Finnmark that specializes in stockfish made of saithe, the product directed primarily towards the Nigerian market. Harald Movinkel Ltd. is located in Bergen and is a stockfish exporter with sales mainly to the USA, Nigeria and Croatia. Other companies within the Norwegian industry include John Gregar, one of the biggest producers of stockfish in Lofoten; Brødrene. Andreassen Værøy, a company located on Værøy that all produces several hundred tons of lutefisk each year; and Brødrene Berg, situated at Værøy and known for its good quality of stockfish. John Greger, one of the biggest producers of stockfish in Lofoten; and L. Bergs Sønner, a stockfish company that also has facilities for tourists are also well known beyond Norwegian borders.

Discover what Othere and his followers learned over a 1000 years ago – look to tradition, history and quality. Look to the far north and Norway for the unique combination of tradition and good taste – Norwegian stockfish and clipfish.

PALFINGER MARINE WAS APPROVED TO THE HIGHEST SERVICE LEVEL WITH MSC.402(96) Read more