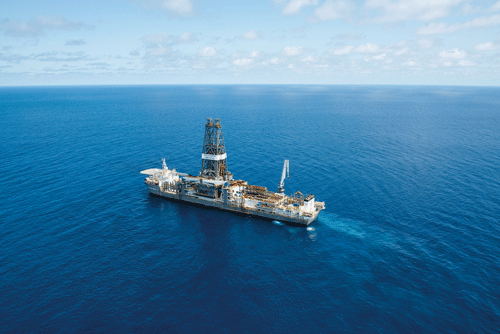 Africa is both promising and challenging. The Norwegian offshore industry is eyeing petroleum field developments in Tanzania for possible opportunities.

Africa has long been a focus for the Norwegian government-industry initiative INTSOK. Almost 30% of global oil and gas discoveries over the last five years have been in sub-Saharan Africa, 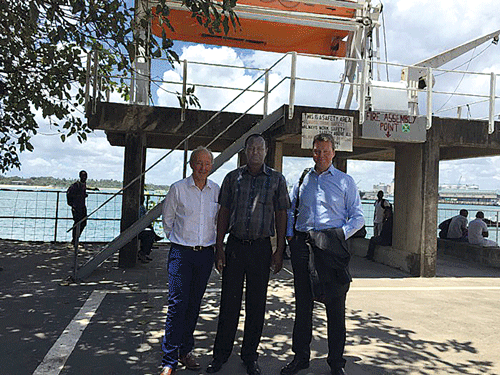 INTSOK’s Regional Director for Tanzania Gulbrand Wangen (left) and CEO of ICD Mr. Christian Testman (right) meeting with Captain Peter Nkunja at Dar Martime Institute (DMI) the day before the High Level Meeting on Oil and Gas in Dar es Salaam. Here they are discussing the possibilities of offering training in Dynamic Positioning at DMI

according to the IEA’s Africa Energy Outlook in 2014. Here, the organization has prioritized international petroleum opportunities for its 300 members in the larger producers such as Angola and Nigeria. The two countries account for the eighth and fourth largest in expected oil and gas expenditures for 2015-2019, based on figures from Rystad Energy.

But there are a number of interesting opportunities on a project-by-project basis in the smaller producing countries such as Tanzania, Mozambique, and Ghana. Gulbrand Wangen, INTSOK regional manager for Brazil, India and Africa, recently returned from a High Delegation visit in September to Dar es Salaam, the largest city in Tanzania, where Statoil is operator for a potential large LNG development in Block 2 that could open up for subsea export opportunities from Norwegian suppliers such as Aker Solutions and FMC.

Norway’s Statoil and British Gas– soon to become Shell – have been the two key international operators exploring possibilities in Tanzania. The Norwegian oil company has been there since the 2007 signing of a Production Sharing Agreement for Block 2 with Tanzania Petroleum Development Corporation (TPDC). Statoil has a 65% working interest as operator in the block, which has resulted in eight discoveries worth a cumulative 22 trillion cubic feet (Tcf) of gas reserves. Exxon Mobil holds the remaining 35%. Statoil will cooperate with BG as operator of blocks 1, 2 and 4 on the development of a joint onshore LNG facility. 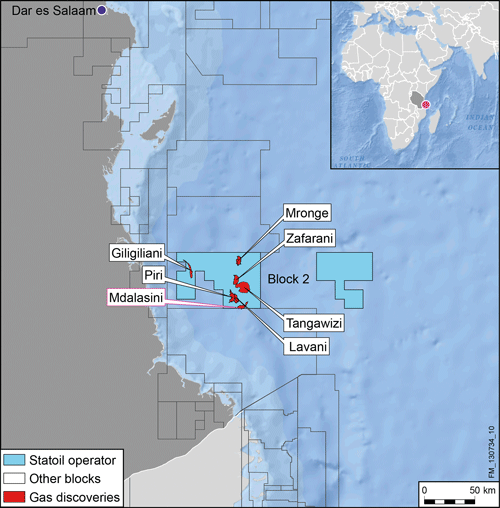 Statoil plans to begin with the gas reserves in the Zafarani, Piri and Lavani fields – all named after the spices saffron, pepper and vanilla in Swahili – for pipeline transport to shore. The Piri-1 well proved to be one of the largest high impact discoveries in 2014, adding an additional 2-3 Tcf of natural gas to in place volumes. The Norwegian operator has decided that the best solution is to develop the finds as a subsea solution, with a pipeline for the gas to a common LNG facility with BG, rather than a floating production unit.

Eliassen believes production will not be the main challenge in developing the field. The finds are comprised of dry gas that can be depleted naturally without injection wells. Eliassen forecasts a 60-80% recovery rate in the field, which is pretty high compared to the expected 70% recovery in the giant Johan Sverdrup field in the North Sea. Rather, the challenge will be the uneven seabed conditions with very pronounced canyons and valleys.

“They could be 200-300 meters deep with steep and unstable edges,” Eliassen said. “Most of the discoveries are located between canyons. We can start with developments there.”

The tricky seabed topography will mean parts of the gas pipeline may need to be buried for protection. The block also poses a challenge because of the water depths of between 2,300-2,600 meters, the far distance from subsea to shore (100 km), varying pressures from several fields into one pipeline system, limited in-country capability, and remote location from established petroleum regions, according to Genevieve Kasanga, Statoil head of communications in Tanzania.

Another hurdle is local content regulations, which are common in African and other oil producing nations such as Brazil. The Tanzanian government has just approved a new regulation that requires that at least 51% of the ownership of any local supplier is Tanzanian.

“This becomes a constraint for development, especially these days when the industry will have to be cost-efficient,” Wangen said. One concrete business case discussed for increasing local competence during his High Level Delegation visit was the possible establishment of a dynamic positioning training center for offshore supply vessels by Kongsberg Maritime in partnership with the Dar Maritime Institute in Tanzania.

Statoil will also have to take into consideration the current low oil price, taxation level and expected gas demands for LNG exports in determining the viability of the Block 2 project. As part of the Production Sharing Contract with TPDC, Statoil is required to deliver 10% for domestic gas use. The remaining 90% is planned for export, mostly likely to Asia, where there are growing concerns over China’s slowing economy.

“In developing gas projects in Africa, one has to consider the ability of local industry and communities to pay for the local gas in combination with the price for gas in China and other Asian countries,” Wangen said.

A final investment decision on Block 2 is not expected until 2019. If approved for LNG development, Statoil’s Block 2 development would be the single largest investment ever in Tanzania and provide a sizeable lift to the local economy. As of the end of 2014, the partners in Block 2 had spent more than $1.8 billion on their operations and employed 600 Tanzanians.

A joint flagship report by the African Development Bank and Bill and Melinda Gates Foundation entitled “Delivering on the promise: Leveraging natural resources to accelerate human development in Africa” forecasts that revenue from gas in Tanzania blocks 1, 2, 3 and 4 could reach an average of $1.4 billion annually over the first ten years of production, representing $15-32 per capita. According to the US-based think tank Center for Global Development the majority of the population currently lives on less than a dollar a-day.

“The current political attitude in Tanzania is that the expectations are very high,” Wangen said. “People think they are going to be very rich because of these discoveries.”