See the journey of the bluefin tuna

The satellite marking from the formula-1 fish has "pinged" from Ireland. It describes a long journey.

On September 8th, sea investigators managed to put a satellite mark on a 250 kilos of mackerel dairy in the island of Bergen outside Bergen.

A total of two mackerel diapers were noted, but the first died soon afterwards. The other boy plantes the brand in a fresh and fast mackerel after effective 45-minute inhalation. Read about the episode here: Mackerel swims on with satellite mark

– The label loosened a while before, but it is not abnormal. We can see that this size was alive and that the brand was broken, tell sea scout Keno Ferter, responsible for the branding project.

However, the satellite mark is still on the verge

– In the 33 day mark hanged on the Formula 1 fish, it has gone from airy jumps to dive at the expedition 487 meters. It has swam through temperatures from 3.5 to 17.2 degrees, Ferter wins, as no has delivered final report from the branding project .

After Øygarden, the most likely course was set south before it returned to the Norwegian coast. Then crossing the North Sea, Shetland passed its north coast and headed south west of Ireland. There fell the mark, flutter to surface and sent data home.

“We have not received 33 days of invaluable firsthand knowledge about the hikes and behaviors of one of the most northernmost of giant fishermen. 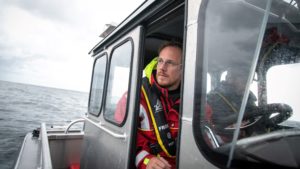 Verda’s largest tuna is back on annual summer bites in Norway after a long time of mischief as a result of international overfishing. It is the very greatest individual who lives here, to their northern latitudes. (Also read: Mackerel can make comeback in style )

Dataa from the Norwegian project enters into a large international data set for mackerel growers. The Atlantic Tuna Commission ICCAT uses research to ensure the effective management of the early truggle species.

“And we want to contribute even more. We have just secured support for a new brand project next year, tell Keno Ferter.

Taking experience with next year

“Made straight is stong fishing is by far the most gentle method of labeling mackerel. Next year’s project will therefore resemble this year’s year.

“Together with the rest of a tropical cyclone, traveling and logistics challenges made us less hours at sea than I hoped for. However, satellite marking of Stongfish Mackerel Dust has never been done before in Norwegian waters. We take all the experiences from this year to create a solid project next year, says the marine scientist.