“With flexibility, new digital solutions and years of professional experience, Beerenberg is able to execute projects to tight deadlines, as the project in the YME field demonstrates,” says project manager Espen Hjortland.

YME is the first oil field on the Norwegian Continental Shelf to be redeveloped after ceasing production. Beerenberg is involved in the journey and has in the past year provided insulation, scaffolding, surface treatment (ISS), rope access and mechanical services for Aker Solutions.

“We won the first contract at YME on the back of the EPCI contract with Aker Solutions which saw us provide ISS and rope access in connection with the Gina Krog hook-up contract (completed in spring 2017),” explains project manager for Engineering, Competence and Technology (ECT), Espen Hjortland.

Good customer feedback on Beerenberg’s first involvement in the project led directly to further assignments at YME.
“We were there right at the start when we cleaned up the existing caisson* and installed an inspection deck (spider deck). It was a complex operation which involved engineering, planning, lifting and methodology, ISS, rope access and material deliveries,” Espen Hjortland says.

That job also generated additional contracts for the company.
“Thanks to the successful execution, we were awarded an extended framework agreement for phase two where the wellhead module (WHM)** was installed on the caisson out at sea and where we are now providing ISS, rope access and mechanical services.” 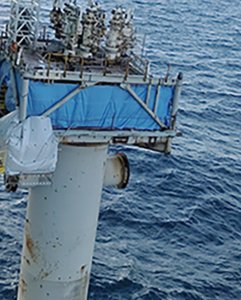 How the caisson looked before Beerenberg cleaned the top and fitted the spider
deck. Supports had to be welded on to keep the caisson steady during the winter
storms.

A large part of the scope involves fitting pipe insulation and insulation boxes.
“All of the insulation boxes are being digitally surveyed on board using scanning before being 3-D designed and manufactured in our factory in Poland. Next, the finished boxes are sent to Norway to be installed. This has proved to be an efficient process as the lead time from scanning to delivery has been very short.” 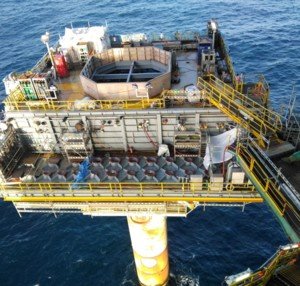 Caisson with the wellhead module in place.

The entire process has been complex and involved many of the company’s departments and services.
“I have to point out that the internal logistics have been one of the reasons why the task was completed so seamlessly. The materials and equipment required were non-standard and demanded a high degree of customisation with a large number of details to take into consideration. Hats off to everyone involved for delivering high quality all the way, from order processing, warehousing and logistics to the final execution,” he says.

“The feedback from the client is clear that the execution of the project has been good throughout, which is nice to hear for everyone. It’s satisfying when a client sets us a challenge, and we manage to find solutions that we initially didn’t have the answers to.”

Projects of this nature require flexibility.

“This kind of project creates a different dynamic than you see on long-term maintenance or new-build projects and requires a high degree of flexibility and an ability to deal with rapid change, amongst other things. At its peak more than 20 people were involved in a single rotation, and they have proved that they are able to think on their feet when they have to,” Hjortland concludes with satisfaction.

Production due to start

The next phase involves hooking up and preparing the Maersk Inspirer platform this spring – the last step before production can start.
“We are pleased to have played a part in this project and have received good feedback on our performance in terms of HSE, quality and productivity. We are very keen to get involved in the final phase, too, but only time will tell whether we get the opportunity,” he says. 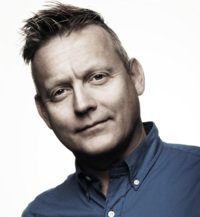 Hjortland believes the industry will increasingly see clients request services that can be delivered to tight deadlines and on projects with a much shorter turnaround time.

“I expect that these types of projects will increase in numbers. That’s exciting for us and will provide great opportunities for us. Our contributions in the YME field and other projects have made us even better prepared to complete similar projects in the future.” 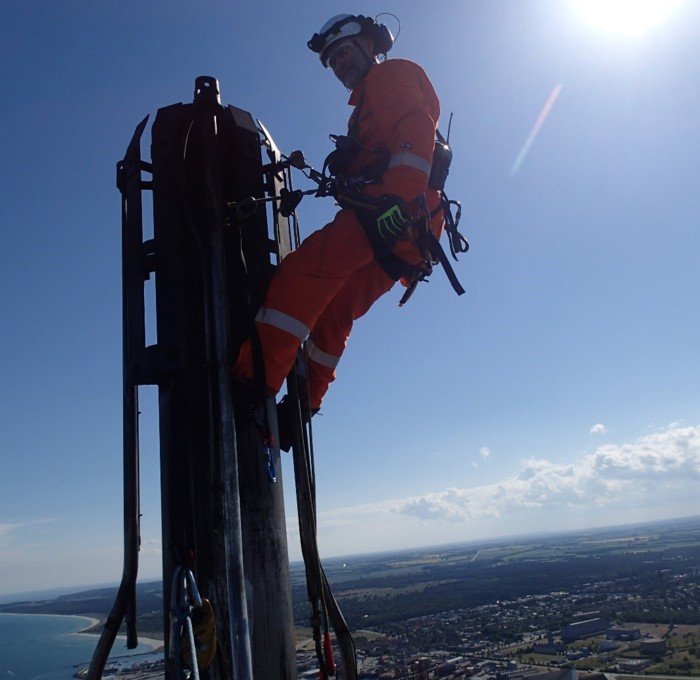 At the top of the installation: Beerenberg access technician at the top of the
flare boom. Inspecting the flare tip with spectacular views over Denmark in the background.

The YME oil field is located in the south-eastern part of the North Sea, 110 km south-west of Egersund. Production began on 27 February 1996, and 7.9 million Sm3 of oil was produced before the field was decommissioned on 17 April 2001.

A decision was made to reopen the YME field in 2007, but the project was shelved in 2012. The project has been described as one of the biggest ever scandals in Norway, racking up costs of NOK 14 billion before it was mothballed.

On 19 December 2017 Repsol submitted its plan to redevelop the YME field. The redevelopment relies on the use of existing infrastructure installed when the field was last developed in 2007. Production will take place on the jack-up rig Maersk Inspirer and is expected to begin in the second quarter of 2020.

* An installation that serves as a workshop during subsea operations.
** A wellhead is the component on the surface of an oil or gas well that provides the structural and pressure-containing interface for the drilling and production Equipment.