Norwegian fish farmers are incorporating the UN Sustainable Development Goals into their business strategy. Even fish sludge could profitably save the environment.

Nearly 200 countries have signed the United Nations’ 17 Sustainable Development Goals (SDG) spanning poverty to partnership. The challenge has been how to incorporate them practically into businesses practice given that there are more than 800 standards for reporting sustainable development and no one wants a red bottom line.

“People want a low carbon society, but not a low income,” said Idar Kreutzer, leader of the Green Competitiveness Committee, during the launch of the DNV GL report Future of Spaceship Earth: The Sustainable Development Goals Business Frontiers, this past October. 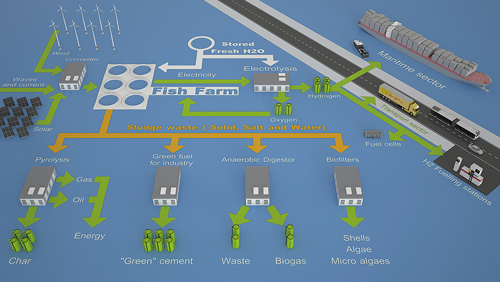 Seafood producer Cermaq was one of the 17 different companies contacted by DNV GL to present business case scenarios for achieving each of the 17 goals by 2030. The Norwegian subsidiary of Mitsubishi has worked the past year on implementing five focus areas based on sustainability: SDG #2 healthy nutritional food; #14 thriving oceans; #8 people leadership; #12 responsible production, and #13 climate action.

Cermaq has for example used a new technology called iFarm to solve the challenges that restrict growth in salmon farming through a high-tech sorting method. This is in line with Sustainable Development Goal #14, also known as Life Below Water, which focuses on the conservation and sustainable use of the oceans, seas and marine resources.

The sensors of iFarm have computer vision that can recognize salmon based on their dot patterns. The technology then registers the number of fish, size, amount of sea lice, and possible signs of disease. The company has applied for 10 Norwegian development licenses to mature the technology into an industrial product.

“We can reduce treatment when we treat only the fish that has lice,” said Cermaq chief executive Geir Molvik. “Similarly, we sort on the basis of weight and remove the fish ready for harvest without stressing the remaining fish.”

“This is a technological leap for cage-based salmon farming, where we shift from group-based operations to individual registration and treatment.”

Under another sustainable initiative, Cermaq is focusing on responsible production (SDG #12) through its Pincoy Project in Chile. The company has partnered on Pincoy with Skretting, Aquagen, Blue Genomics, Pharmaq, Centrovet, Blumar, Ventisqueros to combat SRS (Septicemic Rickettsial Syndrome) to reduce the use of antibiotics by 50%. The deadly bacterial disease is responsible for the majority of salmon mortalities in Chile. 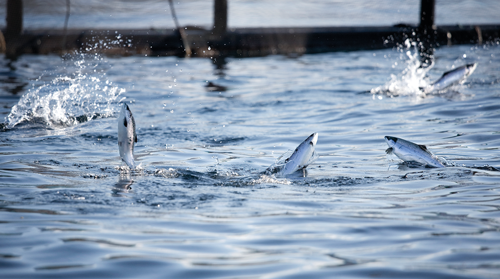 Projects such as iFarm and Pincoy deal with one of the main challenges threatening the aquaculture industry, i.e. sea lice and fish disease. But there are still other threats. Fish escapes, access to raw materials and resource management, acreage conflicts, and organic waste also challenge the sector’s sustainability. The integration of different renewable energies and the wise use of the generated organic waste, also known as sludge, could become a new business opportunity for fish farmers, according to CMR Prototech.

The Bergen-based research group has been working on a solution called Green Fish Farming (GFF) aiming to achieve zero emission to air and water. The GFF concept applies to both onshore and sea-based closed fish farms. Depending on the size and location of the closed fish farms, the GFF concept can integrate different renewable technologies to generate power, such as wind, solar, wave, and hydro.

Currently closed fish farms buy oxygen to oxygenate the fish in sea cages, often at a high price. The GFF concept aims incorporate an electrolysis unit to locally produce needed oxygen and also hydrogen for use in the maritime and transport sectors, such as local boats, or to commercialize it for other external customers.

“I have not seen it elsewhere,” said Crina Ilea, CMR Protetch senior researcher. “Our preliminary calculations show that this is a very good business case for large fish farms.”

In addition to producing power, oxygen and hydrogen, the GFF aims to transform the generated sludge deposits into valuable by-products, such as gas, oil, char, energy and fertilizer. The concept could produce biofuels and biogas via anaerobic digesters or thermal decomposition with additional help from algae, microalgae and shells from biomass farms or grow vegetable via aquaponics. According to a Norwegian Institute of Bioeconomy Research report, the fish farming industry could produce 70-190 million cubic meters of methane biogas, equivalent up to 2Twh energy, from collecting and using all the sludge from 1 million tons of salmon annually.

Another option is to convert the generated sludge into bio-fuels for greener industries. Norcem, for example, last year tested dried fish waste from Flatanger Settefisk to power its cement plant in Tysfjord. That saves the energy-intensive aluminum and cement industries from having to rely on fossil fuels. These methods of recycling sludge also avoid the problem of having to either burn it and pollute the air or leaving the large quantities of fish waste deposits at the bottom of the sea, ruining sea life growth there.

“I would not be surprised to see that in the near future they will be forced by EU regulations to either close their farms or to pay for polluting the water,” said Ilea.

CMR Prototech received pre-project funds from Losna Seafood and NCE Maritime Clean Tech to study the possibilities of integrating the GFF concept in their specific cases and find new ways of collaborating. This February, it applied for a local grant from Regional Forskningsfond Vestlandet for a project to efficiently handle the sludge generated by closed fish farms. CMR Prototech plans to collaborate with Norwegian and international partners to help commercialize the GFF concept.