While there are steadily new finds on the Norwegian continental shelf, the country’s oil and gas production will not last eternally. Therefore Norway is looking to reinvest some of its production profits in order to become one of the foremost...

While there are steadily new finds on the Norwegian continental shelf, the country’s oil and gas production will not last eternally. Therefore Norway is looking to reinvest some of its production profits in order to become one of the foremost nations in the utilization of information and communications technology (ICT) in schools and universities.

For ICT in education to be a success, it cannot be a single subject, but rather an integral part of all disciplines. The educational institutions need to have the proper broadband infrastructure in order to develop services, and the technology has to be seen as a pedagogic aide, not a goal in itself. In some cases edutainment – the combination of education and entertainment – can have the proper pedagogic effects in helping people learn about the benefits of ICT. 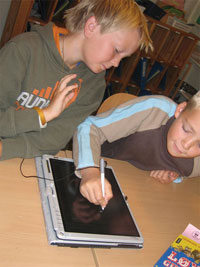 ablet PC for Improved Teaching Methods
For many schools, ICT education is a separate subject in which pupils learn how to use Excel and Word. At Åskollen primary school in Drammen, however, the use of ICT is integrated in all subjects. Over the last five years, the school has become a national pioneer in the use of ICT in education.
As of the beginning of the 2006/2007 school year, Åskollen began cooperation in a unique project together with Fujitsu Siemens Computers and Microsoft Norway to provide sixth-grade pupils with Tablet PCs – mobile computers which allow the user to operate them with a stylus or digital pen instead of a keyboard or mouse.
“A Tablet PC is a normal computer with quite a lot of expanded functionality, and it’s providing much better pedagogic possibilities to adapt the education to the individual pupil,” says Jan Helge Luth, Education Programme Manager for Microsoft Norway.
Åskollen is a part of Microsoft’s “Partners in Learning” programme, and Luth is full of praise for the school. “Internationally, Åskollen is among the best schools we know of because it focuses on pedagogy more than technology, and the technology supports the teaching process,” he says.
For Åskollen it is vital to have the correct pedagogic approach when testing the computers. Nina Nystad is a teacher and one of two project coordinators at Åskollen, and even though she has used computers as a pedagogic tool for many years, she is surprised at how fast the children adapt to the new technology.
“I have experienced that several of the pupils in the sixth grade now take notes when I give presentations, and the girls are especially active,” she says. Learning through handwriting is a tactile method many children benefit from. “Some children prefer using the keyboard, but the Tablet PC enables them to make a choice.”
Being a pioneer school also has some obligations, and Åskollen wants to spread its knowledge to other schools.
“We and our partners want the rest of the schools in Norway to know about the pedagogic possibilities of the Tablet PC. Thus we will make the integration of ICT visible on the premises of pedagogy. If our cooperation is successful, we will provide schools in Norway with a new competence in using ICT as a method in all subjects,” she says.
Fujitsu Siemens Computers is also excited to be a part of the Åskollen project, and Bjørge Jenssveen has been a driving force here. One of the focus areas for Fujitsu Siemens is the public sector in general and education specifically.
“Microsoft has been one of the most important suppliers to drive the technology forward, and the exciting thing about this project is the interface of the monitor because you are using a pen. Thus the navigation becomes more natural and there are greater possibilities for creativity,” he says.
Young Mobile Experts
Telenor, the largest telecommunications company in Norway, also feels that it has a responsibility to provide the proper educational tools to schools and universities. Therefore, when Telenor celebrated its 150th anniversary in 2005, it donated 8,000 modern laptops to schools around Norway.
As Norway’s largest mobile operator, Telenor also wants to see how the mobile phone can support educational tasks. Mona Hovland Jakobsen is a Telenor researcher working with education. “We see that school pupils are incredibly technologically competent, with a very good grip on mobile technology. We want to facilitate the use of mobile phones as a pedagogic tool, but we don’t want to rip off the students either,” she says.
However, the mobile phone competence of the pupils is oftentimes superior to the teachers, and Telenor has seen in its research that schools use mobile phones and digital cameras increasingly to document projects. “The use of technology also depends on the teachers. If you have a 55-year-old lady, she is less likely to be media competent, and therefore there is a smaller chance that she would use new technology in the education,” Hovland Jakobsen says.
Hovland Jakobsen feels there is still room for progress with regards to ICT in Norwegian schools. “The ICT infrastructure must improve, and they need more computers per pupil. We don’t think the teachers utilize the technology optimally as of yet, but the schools have to take responsibility themselves for an increased use of ICT. However, a lot can be done with simple means,” she says.
Edutainment as a Pedagogic Tool
In Telenor, the combination between education and entertainment – edutainment – has been important to reach youngsters. The projects Hitcomet and GlobalCountdown are interactive, high-technology games that aim to teach pupils better use of ICT. 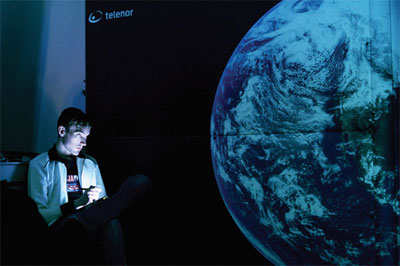 GlobalCountdown is a technologically advanced negotiation game designed for pupils in the upper secondary school. In the game, pupils form an educated opinion about ICT ethical dilemmas and environmental questions in a global perspective. Telenor wants GlobalCountdown to increase ICT knowledge, in addition to negotiation and cooperation techniques.

Hitcomet is Telenor’s other edutainment project – a digital teaching aide in which the pupils learn about sensible use of the Internet and netiquette while working with music and design. Through Hitcomet, Telenor wants the pupils to focus on six ICT themes: the Internet as a source for schoolwork, publishing, security, chatting, copyright and harassment.
Øystein Leiknes Nag is a media teacher at Hadeland upper secondary school outside of Oslo and, in 2006, he submitted his Master’s thesis about technology and media techniques. Nag has carried out some specific research on Hitcomet.
“Hitcomet has both fun and factual elements that teach students safer use of the Internet while they work with music and design,” he says, adding that edutainment is an increasing trend in education. “In recent years, edutainment has become a growing field within e-learning. The term edutainment is directly connected to multimedia, including audiovisual elements such as video and audio used in interactive learning,” Nag says.
GigaCampus
Wireless networks are quite common in universities all over the world, but the challenge is to integrate the networks in the universities’ infrastructures with high-quality, secure gigabit connections for the professors and students. Therefore the Norwegian government supports GigaCampus, a project gaining recognition far outside of Norway’s borders. 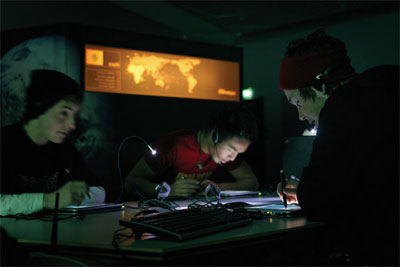 GigaCampus has been initiated by the UNINETT Group, which supplies network and network services for Norwegian universities, university colleges and research institutions and handles other national ICT tasks. UNINETT is a part of the Trans European Research and Education Networking Association (TERENA), and in the spring of 2006, GigaCampus project coordinator Vidar Faltinsen presented GigaCampus at a TERENA conference.

“According to the feedback we’ve been getting, we have one of the top projects,” says Faltinsen. “We have many good autonomous units in our university infrastructure, but the challenge is to make them work together.”
In the GigaCampus project there are seven focus areas: physical infrastructure, high-capacity networks, mobility, person-to-person communication, security, service management and end-to-end quality. By 2009, GigaCampus aims to provide Norwegian universities and university colleges with a high-quality, fault tolerant, end-to-end computer network with gigabit capacity for most users.
“Furthermore, Norway’s students and researchers will be able to move seamlessly around the campus areas with wireless network connections from laptops and handheld units such as PDAs,” Faltinsen says.
Norway is one of the most developed countries in the world when it comes to IP telephony, and Faltinsen wants to take advantage of this in the networks of the Norwegian universities as well.
“We want to provide high-quality, IP-based person-to-person communication. This will make it much easier for end-users to establish real-time speech and video conversations over the Internet,” he says, adding that secure communication is vital to ensure that there will be no problems with privacy. “The university and university college sector’s security work will be well coordinated, and a common framework for the security policy will be taken into use.”