Palfinger wind cranes in Taiwan and Germany officially in operation

In late December 2019, the Taiwanese offshore wind farm Formosa 1 Phase 2 officially launched commercial operations – and so did 20 new PALFINGER cranes. At the same time, PALFINGER has also expanded its market presence in the North Sea.

PALFINGER has played a key role in the first offshore wind project in Taiwanese waters. The turn of the year marked the official launch of commercial operations of Formosa 1 Phase 2, a wind power plant on the island’s west coast. PALFINGER has equipped a total of 20 Siemens Gamesa SWT-6.0-154 direct-drive offshore wind turbine platforms with an equal number of the tried-and-tested PF9000-2.9 TP cranes. With a capacity of 128 MW, Formosa 1 (Phases 1 and 2) is expected to supply up to 128,000 households in Taiwan with energy.

“Acting as a supplier for a flagship project like Formosa 1 was an essential step for us to successfully expand into the Asian offshore wind market. Formosa 1 has fostered this potential immensely – and we will definitely build on it”, says Rupert Reischl, Global Sales Manager Wind.

Other ongoing projects on the north-east Asian market include the Yunlin offshore wind farm and Changhua demonstration park project. 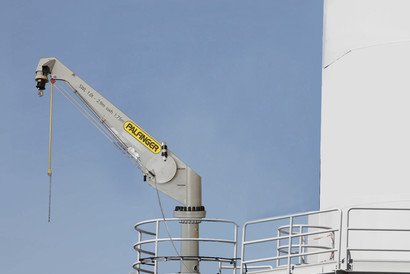 In addition to north-east Asia, PALFINGER is continuing to assert its market presence in Europe. Current projects include Germany’s biggest wind farm Hohe See and Albatros, which also recently launched operations. For these projects, PALFINGER has produced a total number of 87 cranes.