In the 1970s, Japan did not import a single piece of fish and it did not use salmon for sushi. That all started to change in the 1980s after a Norwegian seafood delegation visited the Asian country and Project Japan...

Forty years ago, Japan enjoyed a self-sufficient seafood industry. It produced around 7 million tonnes and consumed about 60 kilograms of seafood per capita annually, well above the world average of about 15 kilograms. Still, the Asian nation had enough fish to be a net exporter.

By the mid 1990s, the picture had radically changed. Japan was only 50% self-sufficient and needed new suppliers to satisfy the huge demand at home. There were several reasons behind the breakdown in Japanese fisheries, according to Bjørn Eirik Olsen, director at the Norwegian Institute of Food, Fisheries and Aquaculture Research (Nofima) and former fish attaché to the Norwegian ambassador in Japan.

The two most important reasons for the fall were that Japan was overfishing its stocks – partly because of its lack of a quota system – and because it had been thrown out of other countries’ fishing zones, said Olsen. There were also natural factors related to Japan’s complicated ocean system that ended up harming its fishing stocks. 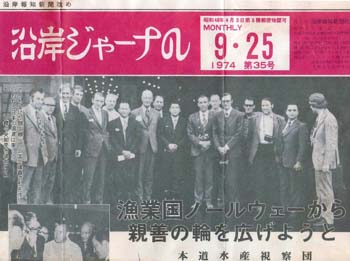 In 1974, a Norwegian parliamentary delegation travelled to Japan to widen the circle of friendship. Present was Thor Listau, member of the shipping and fisheries committee and founder of Project Japan, and Hiroshi Niwa, head of the Norwegian Trade Council in Tokyo.

Japan seemed a natural market for Norwegian seafood. Thor Listau, Norwegian member of the parliamentary shipping and fisheries committee, first became inspired with the idea of selling Norwegian fish to the Japanese following a trade delegation visit to Japan in 1974. The trip was meant to widen the circle of friendship between the two nations.

Listau went back to Japan in 1985 towards the end of his term as Norwegian fisheries minister. He brought with him a seafood delegation of close to 20 people representing Norwegian seafood exporters, ministers and organizations. When he returned, he decided to establish a government initiative called Project Japan that would promote the Norwegian seafood industry there.

Their initial goal was to market all types of Norwegian fish, particularly capelin, and double exports to Japan in both volume and price. At the time, Norway exported around NOK 500 million in seafood products to Japan, representing 1% of Japan’s total imports and 7% of Norway’s seafood exports. By 1991, that amount had grown to NOK 1.8 billion.

“It’s not just due to Project Japan…but it opened doors,” said Olsen. “It made Norwegian exporters focus on Japan.”

The project ended up in having a profound effect on the culinary habits of Japanese who were unaccustomed to eating salmon raw. The preferred fish for sushi and sashimi were tuna and sea bream. Salmon was used for grilling and kirimi, a lightly salted and dried fish dish. The Japanese considered Pacific salmon dangerous to consume raw because these wild fish were exposed to parasites and considered too lean for sushi. Moreover, domestic tuna distributors were very protectionist.

“Everybody said ‘we do not eat raw salmon’,” said Olsen, who was also responsible for market research for Project Japan from 1986-1991. “We had to really fight to introduce salmon into the market…It took 15 years from when the first salmon went to Japan (in 1980) to the breakthrough for raw consumption in 1995.” 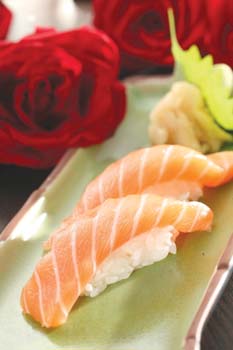 Norway was responsible for introducing salmon for raw consumption in Japan.

Arne Hjeltnes, chief executive at digital advertising agency Creuna in Oslo, says getting the Japanese to put salmon on a lump of rice is perhaps one of Norway’s greatest export successes in the last twenty years, possibly even a better invention than the Norwegian cheese slicer. He has been working in the seafood industry for five years, three of which for the Norwegian Seafood Export Council in Hong Kong.

He said during his years working with seafood, people were always amazed when he told the story about Project Japan. So he decided after having met the original group from Project Japan at its 20-year anniversary celebration in 2010 to make a Norwegian documentary tracking the whole history. The television programme will be available in English to the Norwegian Seafood Export Council.

“The aim (of Project Japan) was to get it in the best hotels and restaurants,” said Hjeltnes. “They knocked on doors and the (Norwegian) ambassador served salmon to all his guests.”

The project partly owes its success to a number of economic factors that worked in Norway’s favour. The population of Japan increased from 93 million to 122 million from 1960-1995, real purchasing power doubled, and seafood consumption increased from 5 million to 9 million metric tonnes (from 53 to 73 kg per capita). At the same time, the Japanese fisheries industry decreased and seafood prices were rising.

“Every good project has a portion of luck,” said Olsen. “In regards to timing, we were lucky. The Japanese market was a good market for seafood.”

Project Japan not only blazed a trail for Atlantic salmon for raw consumption in Japan, it also opened doors for the salmon sushi markets in China, Hong Kong and Singapore. Last year, China imported more Norwegian salmon than Japan. Norway is the dominant exporter of salmon to China, 80-90% of which is eaten raw.

A japanese food consisting of cooked vinegared rice (shari) combined with other ingredients (neta). Neta and forms of sushi presentation vary, but the ingredient which all sushi have in common is shari. The most common neta is seafood. Raw meat sliced and served by itselfis sashimi. 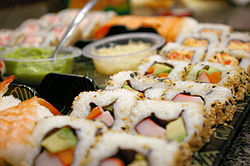