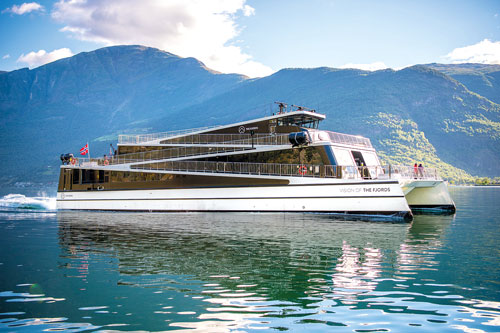 Norway was the first nation to have a fully electric car and a passenger ferry. Now the country will make all future ferries green and a zero-emission maritime industry by 2050.
Norway has ambitions of reducing its greenhouse gas emissions from local shipping by 40% in 2030 compared to 1990. The government has already implemented a number measures geared towards that goal, such as funding programs by Enova, the NOx Fund, and Innovation Norway.

Norway has recently taken those efforts a step further by requesting that all local public ferries and speedboats utilize low or zero emission technology in all future ferry procurement contracts. As part of the push, the government has pledged NOK 65 million this September (2016) toward the construction of several new green vessels and ferries.

“The Paris Agreement commits us to cutting climate gas emissions, including those from shipping,” said Vidar Helgesen, Norway’s Minister of Environment and Climate, regarding this latest public grant. “We can now ensure that we will get green ships and ferries ready for construction.”

But finding the ships and technology that can meet these requirements is not always easy given the commercial risks. A new state-sponsored program called Pilot-E hopes to make it easier to innovate these new green concepts by funding zero emission vessels through a fast-track process from idea to market. The Research Council of Norway, Innovation Norway and Enova have initially earmarked NOK 70 million for Pilot-E to help develop environmentally friendly technology.

Trond Moengen, Pilot-E program secretary, believes this will be a strong catalyst for green growth to help Norway reach its greenhouse gas commitments after COP21 in Paris, as well as present export opportunities. Funding would not be limited to just small coastal ferries, but all other vessels such as fast passenger ferries, supply boats, and aquaculture support vessels, that can realize zero emissions.

“There will be no burning of fossil fuels,” said Moengen at Pilot-E’s kick-off conference in Oslo this June. “Zero is zero.”

The Maritime CleanTech cluster in Western Norway is one of those hoping to get financing for their solutions. The Norwegian Center of Expertise comprises 56 companies, academic institutions and research organizations spread between Stavanger and Bergen. It helped develop the world’s first fully electric car and passenger ferry Ampere, which started operations last year.

The success of Ampere was not just due to battery technology, but materials and hull shape, according to Nils Aadland, NCE Maritime CleanTech maritime advisor.

“I don’t think we would have built an Ampere today unless we had the regulatory changes,” said Aadland.

Maritime CleanTech partners have proposed a zero-emission passenger ferry Urban Water Shuttle concept that can be used for collective transport in larger coastal cities. It has also designed a “ship-in-ship” zero-emission cargo vessel concept called Short Sea Pioneer that can reduce emissions at sea and help take trucks off the road. Both solutions could qualify for Pilot-E funding and become a reality.

One successful concept that has already made it off the drawing board, and even won international acclaim, is Brødrene Aa’s sleek Seasight design. The third-generation Norwegian shipyard delivered the hybrid electric sightseeing vessel Vision of the Fjords to ferry operator Fjord last July based on Seasight. The vessel is battery powered but can use diesel engines in transit to increase its range.

The vessel received the 2016 Ship of the Year Award by maritime magazine Skipsrevyen at the SMM exhibition in Hamburg last September. The jury highlighted the innovative and efficient diesel propulsion for long distance transfer and electric propulsion for quiet and pollution-free sightseeing, as well as the design of the vessel itself and the modern passenger facilities.

The 42-meter lightweight carbon-fiber catamaran has three panorama zones that ensure passengers get a glimpse of the dramatic landscape in Nærøyfjord, part of the world’s longest and deepest fjords. The winding mountain trails on deck give passengers the feel of scaling heights while chugging quietly through the UNESCO listed fjords of western Norway.

The hybrid propulsion system was developed by Mancraft, while Marcontrol delivered the propulsion control and automation system. ZEM/LG provided the battery system and ABB the drives and power management system.

Still, green ferries such as Vision of the Fjords and Ampere are only part of the solution. Norway’s Green Coastal Shipping Program plans to create a future Norwegian fleet that run on batteries, LNG, and other eco-fuels for offshore vessels, ferries, container ships, tankers, tug boats, aquaculture and fishing vessels. The Norwegian classification company DNV GL established the public-private partnership in January 2015 with 18 members. It has since grown to include more than 30.

Under the program’s latest development, DNV GL delivered a Roadmap for Green Coastal Shipping last October to the government’s expert panel on green competitiveness. The road map lays out plans for reducing greenhouse gas emissions to 60% of today’s levels by 2030 and down to zero by 2050. The Norwegian local maritime industry currently contributes 9% of the country’s total emissions.

“As early as in 2001, the world’s first LNG driven ferry Glutra started operating in Møre (Norway),” said Jon Rysst, senior vice president and head of DNV GL Maritime North Europe. “Last year, the world’s first electric-powered ferry Amperestarted regular operations across Sognefjorden. We need to continue to create similar examples, both from what we today see as possibilities and also new alternatives that we can create in the coming decades.”