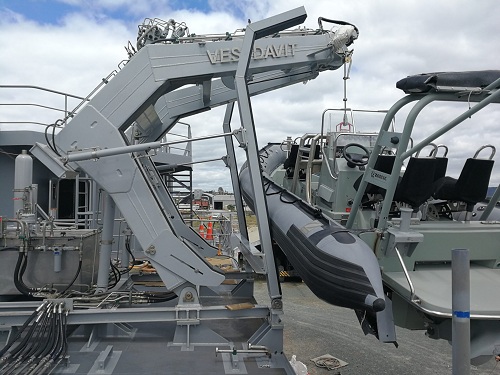 Since 2000, Vestdavit has supplied 14 davits for seven NZ Navy vessels.

Boat handling technology from Vestdavit is playing a central role in The Royal New Zealand Navy’s drive to operate Realistic Working Environments (RWE) at its new Devonport Naval Base training facility, Auckland, which is set to open in March.

RWE uses ‘like for like’ equipment to that installed on board RNZ Navy ships, working within a controlled training environment. The new centre includes a purpose-built landside facility housing a replica Inshore Patrol Vessel, plus an innovative Seamanship Training Aids Facility Pontoon (STA). The STA is kitted out with a range of equipment designed to allow new trainees to develop their seamanship skills in boat handling, rope work, anchoring, berthing and towing through repetition before they need to perform in an operational environment.

A PLAR-4000 davit from Vestdavit is a major feature of the pontoon, where it is mounted on the starboard side to allow personnel to practice boat approaches, launch and recovery of RHIBs. For obvious reasons, however, the RWE approach envisages operational training that equips seafarers to operates davits on both sides of a ship.

“Unlike a ship, the pontoon could only take one davit, but the requirement to train both port and starboard approaches remained,” explains Lieutenant Commander Angela Barker, RNZN Deputy Maritime Lead, Capability Branch. “In order to achieve this, we have had a dual receive cradle put in place and this will allow both approaches to be used.”

In addition, a sea-water cooling system has been installed to lengthen the training time of the equipment as the trainees will be repeating the activity at a much higher rate than would be the case at sea.

“The PLAR davit has been especially adapted to replicate the keel supports and boarding arrangements for port and starboard handling,” says Alasdair Morrison, New Zealand Manager for Vestdavit representative agency and partner Antelope Engineering. “Load testing was completed successfully at the end of October in Ruakaka, before the davit was transported to Devonport.”

Naval architect Worley Parsons designed the STA project, with South Pacific Industrial acting as ship builder working with contractor H-Infrastructure Limited. The pontoon is fixed to two piles using an articulated truss. Other features include an accommodation ladder, Pilot and Boarding Assault ladder positions, a life raft launcher, a HIAB Crane and a Swimmer of the Watch Gantry. 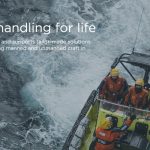