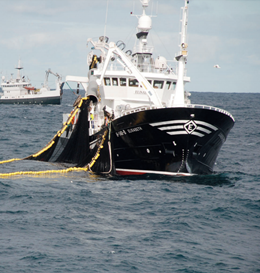 The Centre for Research-based Innovation is Sustainable Fishing and Pre-processing technology (CRISP), creates innovative solutions that will benefit the fisheries around the world. CRISP performs reserach aimed at enabling innovation in technologies and solutions for sustainable harvesting and optimal pre-processing of live marine resources. The goals of the Centre will be met through specific projects that aim to enable skippers to make informed descisions from the point in time when the fish is locate until the catch is landed.

Supermarkets want customers to know how fish are caught. Fishing with trawl should not have a negative impact on the seabed. Unwanted bycatch has to be separated gently and released without damaging the fish. By controlling the amount of fish and what kind of fish enters the trawl, the bycatch should be avoided. The trawl should not be filled with too muhc fish compromising the quality. Sonar technology should determine what kind of fish are entering the trawl or is surrounded by the seine.

World fisheries exist within an all-encompassing domain of globalization, population growth and environmental challenges, with a consequent plethora of local, regional and global crises of various degrees of gravity. Within this domain, fisheries and aquaculture provide a significant share of the world’s food supply. The sector now needs to make considerable efforts to adapt to the situation of no, or very imited growth in landings and more stringent management of fishing efforts.

The fishing idustry in spite of being heavily regulated, is still largely private, with normal profit objectives. This situation is not likely to change. CRISP’s focuses on sustainable harvesting according to regulations, augmenting the value of the catch through improved quality, and also on improving efficiency to reduce costs.

The fishing fleet faces challenges related to issues such as:

The results are already coming in. Kongsberg Maritime/Simrad, in collaboration with the Institute of Marine Research in Bergen, Norway, has developed sonars that identify the type, quantity and size of fish in a shoal. Better estimates mean fewer risks for detraying the purse seine, resulting in fish killed and lost. Because it is also possible to obtain information about fish species and size, it will prevent loss of time and fuel used on casting for fish that is to be released.

Developed is also a ship’s side sonar that works so that one can get information on how much and what kind of fish is in the purse seine. This equipment is now instralled and being tested on board fishing vessels.

As part of the CRISP and integrated system, consisting of underwater video cameras, trawl sonar and an echo sounder, that provides information to the fishing vessel on which species of fish caught, size and how the trawl performs has been developed.

While the first sonars had a purpose – to locate fish, new generations of the same technology provide a lot more information. TrawlEye was made to ensure that the trawl performed correctly thus maximising the catch. The same technology in the future may also be used to reduce the catch.

Norwegian fisheries, in line with other countries’ fisheries, are under increasing pressure from interest groups with different agendas. the Marine Stewardship Council and Friends of the Sea want to push for sustainable fisheries. Greenpeace and WWF have focused on IUU fishing, bycatch and other issues. Other organizations are working to stop the bycatch of turles, sharks, dolphins and other marine mammals while others are concerned about animal welfare and the suffering a fish is exposed to when fished.

Some organizations build their activities on research and facts, while others are concerned about the moral aspect with regards to causing the fihs pain and death. Some believe the practice that the fish should not be fished at all, and beans and lentils should feed the world’s population. Interest groups range from the radical utopian to those who have a realistic and sensible approach to issues.

The marine Stewardship Council is probably the group that has influenced the world’s fisheries in most recent years. They are involved in the entire value of the chain, from the fisherman to the customer and in a common goal – to create sustainable fisheries.

Many governments are cautious about forcing the fishing fleet to use modern technology to make fishing more effective and selective. The result could be fewer vessels and fewer jobs. Experiences in countries like Morocco shows that large and more modern vessels, equipped with efficient fishing gear, can provide better quality and less loss of fish. Brought onshore this fish can create jobs at onshore facilities in Morocco, instead of being processed on board big foreing factory trawlers and then being exported without creating jobs in Morocco.

The CRISP program focuses on Norwegian fisheries. But all the technology being developed will have a global market. Several participants export its products to fisheries worldwide.

Limits to the use of bottom trawls

One of the important research areas for CRISP is the development of trawling with reduced bottom contact in the cod fishries. Norwegian trawl fisheries for cod are traditionally based on bottom trawling in the Barents Sea was banned in 1979 due to large catches of undersized fish and high levels of discharge of unwanted catch.

Since the launch in 2011, CRISP’s main focus has been to develop and facilitate trawling for cod fish with less impact on the seabed than today, without reducing efficiency and profitability.

One of the way to reduce bottom impact in the Barents Sea is to resume pelagic trawling. Scientists believe it is possible as selection devices have been developed substantially reducing the risk of catching small fish.

Among other things, the trawl producer Egersund Group developed a trawl that has given good results in the saithe trawl fishery and also worked well in cod and haddock fisheries. Sometimes very large catches made with this trawl type have also made it necessary to develop technical solutions to regulate catches in each haul. CRISP has developed a system that can greatly determine how much fish is to be caught in each trawl haul.

Research and development organized by CRISP will help to make Norwegian and other countries fisheries more environmentally-friendly and sustainable. It is already making Norwegian fish more attractive in markets where customers focus on the environment and sustainability.

This arcticle was originally printed in Northen Seafood.