The establishment of the Norwegian Peder Sather Center for Advanced Studies at UC Berkeley was recently announced in connection with Transatlantic Science Week.

The aim of the Peder Sather Center is to promote Norwegian cooperation with UC Berkeley, one of the top universities in the US, by facilitating researcher and student exchanges at the master’s and doctoral levels and by providing support to seminars, working meetings and open meetings.
The centre also plans to allocate funding for research in a wide range of subject areas.

The centre, which will be housed at the university’s College of Letters and Science, will begin its activities during the course of 2012.

Legacy of a prominent Norwegian-American

The centre bears the name of Peder Sæther (Sather), a Norwegian who emigrated to the US in 1832. Mr Sæther quickly established himself as a banker and accumulated considerable wealth over the years. He donated land to UC Berkeley when it was founded in 1868, and a large portion of his estate was donated to the university after his death in 1886.

The Norwegian banker’s legacy is visible to this day in university life at Berkeley, most notably in the Sather Gate, once the main entrance to the campus, and Sather Tower, the third largest bell and clock tower in the world. The university also organises the Peder Sather Symposium every other year on a designated theme related to economics, politics or culture.

Six of Norway’s universities, as well as the Norwegian School of Economics and the BI Norwegian Business School, have already agreed to allocate funding to the centre. The total budget has reached almost NOK 36 million for the first five-year period. 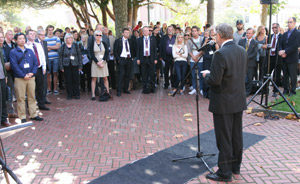 The new Peder Sather Center will help to enhance the ties between the US and Norway,” said Arvid Hallén during the introductory event on 25 October. (Photo: Kristen Ulstein)

Liv Duesund, a professor at the University of Oslo, and Trond Petersen, a Norwegian professor at UC Berkeley, have organised the fundraising effort to assist with the establishment of the centre. Ms Duesund hopes that all eight Norwegian universities will soon be involved in the project.
During the introductory event on 25 October, Director General Arvid Hallén of the Research Council of Norway announced that the Research Council will allocate NOK 2.5 million to the centre.

“We are proud that a Norwegian immigrant played such a fundamental role in the establishment of one of the world’s best universities. The new Peder Sather Center will help to enhance the ties between the US and Norway,” said Mr Hallén at the event.

“International research cooperation must be developed by the researchers themselves, but both the institutions and those who fund research must get involved in order to facilitate cooperation, remove obstacles, establish incentive schemes and enter into agreements,” concluded Mr Hallén in his remarks.