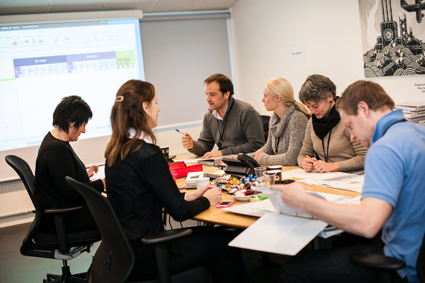 Many applicants in the 22nd licencing round

When the application deadline for the 22nd licencing round on the Norwegian shelf expired on 4 December, a total of 36 companies had submitted applications.

“It is no great surprise that several companies apply for production licences in the Barents Sea”, comments exploration director Sissel Erikson. “After Statoil found oil and gas on “Skrugard” (7220/8-1) last year, the interest in exploring the Barents Sea has risen sharply. The confidence in new opportunities and discovery expectations has increased. Several exploration wells are already planned in the Barents Sea. This round will help maintain the level of activity in the southern part of the Barents Sea, as well as clarify the resource potential”, says Eriksen.

This round announced 86 blocks or parts of blocks, of which 14 are in the Norwegian Sea and 72 in the Barents Sea.

These 36 companies have applied for production licences, individually or in groups:

This gives us a broad player picture; here are large, middle-sized and small companies, including gas companies and new companies. 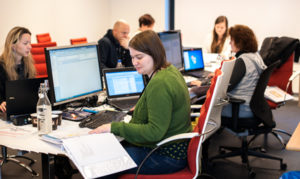 When the applications have been registered in the databases, they are sent on to the adjacent room for registration in the NPD’s archives by: From the left: Anja M. Næss, Rolv Vidar Holgersen, Liv Judith Kvamstad, Margrete Varhaug, Birgitte Madland and Åshild Ubostad Plener. Photo: Monica Larsen

“It’s exciting that new companies want to enter the Norwegian shelf. The Norwegian authorities facilitate the establishment of new players, because we believe that this can contribute to increased value creation”, says Eriksen.

“This marks the start of the process to evaluate the applications. The Norwegian Petroleum Directorate (NPD) aims to find the best strategy for exploring the areas, and is therefore looking for companies with the best knowledge and best applications”, says Eriksen.

“Companies which are awarded production licences must have technical expertise and sound geological understanding. Financial strength and experience is also emphasised.”

“As regards group applications, we look at the group composition, recommended operator and shared expertise.”

The blocks come with fishery and environmental terms. The NPD has itself mapped all the announced blocks.

The Ministry of Petroleum and Energy aims to award new production licences in the 22nd licencing round before the summer of 2013.