The Norwegian aquaculture and fishing industry has joined the green shipping wave with a number of pioneering electric fleet initiatives.

In 2015, the Norwegian maritime industry launched the DNV GL-led public private initiative, the Green Coastal Shipping Program. The idea was to encourage research and development of green technology concepts in the country’s shipping sector. Together with 25 partners from the Norwegian maritime industry and authorities, they presented five pilot projects, mostly within oil and gas and cargo transport.

However, one of the pilots targets the aquaculture segment with an environmentally friendly fish farm support vessel. ABB has worked with the Norwegian Coastal Shipowners Association for the past year with Trondheim-based shipowner Egil Ulvans Rederi on developing a hybrid battery powered concept that is safer, more cost effective, and environmentally beneficial. 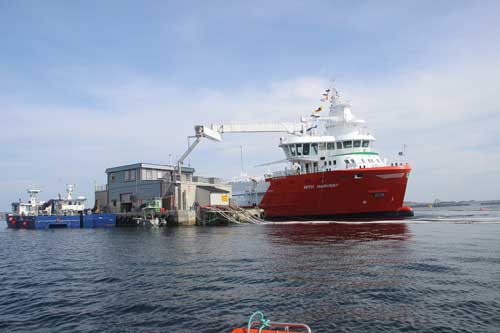 The objective of the pilot project is to define how to best use a battery in combination with a combustion engine to make an energy efficient hybrid propulsion system. The concept is based on a 70-meter long vessel that can be converted to fit either a hybrid LNG and battery powered propulsion system or a diesel-plus-battery solution. Both concepts would cut down on NOx, SOx and CO2 emissions. CO2 alone would be reduced by 240 tons per year, the equivalent of 130 cars.

ABB foresees using batteries in combination with marine diesel oil could lower both capital and operational expenditures. The vessel would rely on battery power to shave power peaks when loading and unloading at sea and absorb load changes from blasts and swells. A battery back-up solution would also create safer operations by reducing the risk of engine failure and serving as back up. Best of all, it would meet the growing customer requirement for sustainable solutions.

“Aquaculture companies are supposed to ask for these types of vessels because of the green and safe side,” said Jorulf Nergård, ABB vice president business development and short sea shipping. “The risk to cause damage to cages in the case of a blackout in the worst case with the worst conditions is reduced. Insurance costs could then be lower. So there are lots of issues that should be appreciated in new requests for vessels.”

ABB has started phase two of the project and is working on getting a shipyard to build or convert a vessel this year. The proposed concept vessel would be large enough to handle the more complex and demanding operations offshore that have come with the growing aquaculture sector. The trend in the industry has been towards larger fish farms in exposed waters, more delousing on wellboats, and larger-size smolt grown onshore to help the industry grow more sustainably.

Grovfjord Mekanisk Verksted has similarly seen a growing need among its fish farming customers for sustainable and environmentally friendly solutions. As a result, the Norwegian shipyard has developed a zero emission workboat for fish farms called GMV Zero. According to Arnold Hansen, the leader behind the project, it would be the world’s first fully battery powered vessel of this type — a good sales argument for fish farmers wanting to have a green profile.

“Over the last half year there has been greater interest,” said Hansen. “In addition to the elimination of harmful emissions, we see a savings in operation expenditures, both in maintenance of the diesel motors which have to be changed every 5-10 years and the costs related to diesel and luboil. One fish farmer, for example, delivers salmon to a US chain that is absolutely explicit that their product must be as sustainable as possible.”

According to Ashley Bouldin, engagement planning director at US-based marketing agency The Food Group, there are new food consumption drivers among the largest population in the US, the Millennials and Generation X between 18-50 years old. Before, consumers focused on price, taste, and convenience. Now the young “idealist” generation is also concerned about social impact.

“They are looking to buy from companies that are giving back and are responsible,” said Bouldin during her presentation at the Norwegian Seafood Council Aquaculture Conference 2016 in Oslo.

The idea for GMV Zero originally started several years ago as way to eliminate the exposure of the workers on board to carcinogenic diesel exhaust particle emissions. Since then, the prices of batteries have dropped dramatically and the number of fish farms along the Norwegian coast with electricity from the grid has increased to about 85% of all farm locations. Both factors have contributed to making 100% battery operation feasible. The prototype vessel will first start operations for Norwegian salmon producers Northern Light Salmon and Sørrollnes Fisk.

GMV is currently building the 14-metre long vessel, which will service two fish farms over a 15-18 months’ test period starting by June. The vessel will test all stages of farming and collect data on energy requirements for various work operations. The expectations are that GMV Zero could save at least NOK 190,000 per year in operational expenditures compared to a diesel-powered boat and reduce CO2 and NOx emissions by 113 tons and 1.15 tons respectively. The ship is designed to service 12 cages up to five nautical miles from its base for a full day without recharging.

GMV Zero’s catamaran is similar to electric fishing boat Karoline by Selfa Arctic, which was nominated for the innovation prize at Nor-Fishing Conference 2016 in Trondheim. Nordic Wildfish received Nor-Fishing’s environmental prize by the Norwegian Fisheries Directorate for its energy-efficient freezer technology and method for processing catch on-board its trawlers Roaldsnes and Molnes.