The UN Intergovernmental Panel on Climate Change has estimated that carbon capture can amount to almost half of the emission cuts this century. The Norwegian Government has made it a priority to reduce CO2 emissions through carbon capture and storage...

Norway recently took major steps towards realizing this goal. In January 2009, the Government gave the long-awaited go ahead to invest in the carbon capture plant at the Mongstad plant, StatoilHydro’s oil refinery on the west coast of Norway, and made an extraordinary grant of 962MNOK to Technology Centre Mongstad as part of the government stimulus package. That same month, the Research Council of Norway pledged to establish eight centres for environment friendly research (CEER), two of which were dedicated to carbon capture and storage.

The Government’s plan is to build four carbon capture plants at Mongstad by 2014, the first of which is an amine industrial plant being built by Aker Clean Carbon. The others will be a test plant for chilled ammonia, followed by a full-scale plant for the refinery (flue gas is similar to flue gas coal power) and another full-scale plant for the new gas-fired power plant. Prior to that, a CCS plant will start up in 2012 at Karstø in western Norway, the first full-scale one in the world for a gas-fired power plant. 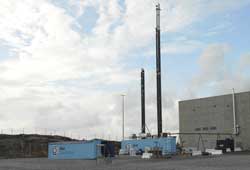 ker Clean Carbon’s Mobile Test Unit, pictured here at the Risavika Gas Centre near Stavanger, will be sent in May to the Longannet power station in Scotland for a seven-month pilot programme to test SOLVit technology on coal exhaust. In the future, Longannet could become the world’s first full-scale capture plant for coal power.

Aker Clean Carbon has been at the forefront of carbon capture technology. The company started up in 2007 but its history actually dates back 19 years. One of Aker’s earliest projects was a carbon capture plant in 1996 on Statoil’s Sleipner oilfield platform offshore Norway, where it was used to remove 1 Mt/year CO2 from the gas before it was sent into the pipeline and stored underneath the seabed. This saved costs on CO2 taxes as well as transport, since the lower amount of CO2 meant it could use less expensive pipelines.

“It was the best economical solution,” said Oscar Graff, Aker Clean Carbon Chief Technical Officer. “It wasn’t an environmental project when it started.”

The company has focused on post-combustion and further development of its amine technology. The main market is the coal industry, but the technology also applies to cement producers, oil refineries, and gas-fired power plants.

One of Aker’s competitive edges is its add-on capture plant that can be used at existing or new plants without affecting power generation. Its competitors use a separate air separator for their systems and end up needing energy from the power plants. 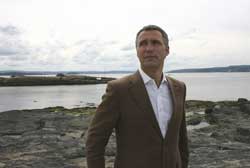 “When President Kennedy said that Americans would land on the moon within 10 years, Americans had not yet been to outer space,” said Jens Stoltenberg, Norway’s Prime Minister, in his 2007 New Years’ Address. “Our vision is that within seven years we will have the technology in place to make it possible to clean greenhouse gas emissions. That will be an important breakthrough in reducing emissions in Norway and when we succeed, I believe the world will follow. This is a major project for the country. It is our moon landing.“

The company has developed and patented the most effective amine solvent for capturing CO2 during the post combustion process, which removes minimum 85% of the CO2 from the treated exhaust. They are also developing a CO2 capture plant integrated with a bio-energy plant based on wood chips. “Bio-mass has the potential of increasing capture by 30% and increasing power 20%. That raises the capture rate from 85% to 115%, making it carbon negative,” said Graff.

The main challenge currently facing the industry is the commercial viability of the technology. Jan Roger Bjerkestrand, Aker Clean Carbon Chief Executive Officer, said it is not likely to be commercially viable until 5-10 years. For that to happen, the industry needs incentives, higher CO2 taxes, a cap and trade system, and political will. It then becomes a matter of driving the cost down.

The two main cost elements are the amine (the solution used to capture carbon) and the energy convertor for re-boiling the CO2 before it is pumped into a geological structure. The company is involved in an eight-year research program (2018-2016) with the Norwegian research institutes SINTEF and NTNU called SOLVit that aims to develop a low-energy amine solvent with low corrosion, low degradation, and minimum environmental impact. In the first phase, the goal is to reduce the energy requirement 35% by 2011. In the long term, the goal is 50%. Another way of making it more cost effective is to use the captured CO2 for enhancing oil recovery.

The Research Council of Norway in February named eight centres for environment friendly research (CEER), which will focus on topics ranging from wind, solar and bio-energy to CO2 capture and storage and zero-energy housing. The two CCS programmes are SUCCESS and BIGCCS.

The Norwegian Government has committed as much NOK 1 billion for the centres over the next eight years, with another NOK 1 billion from industry. The centres will contribute to the development of technologies for environmentally friendly energy and realise the level of Norwegian expertise in this area. In the long term, the centres will generate new industrial activity and new jobs. Each of the centres is expected to be a national leader in its field.

Christian Michelsen Research in Bergen is heading the SUCCESS project, together with partners from the Institute for Energy Technology, Norwegian Institute for Water Research, Norway’s Geotechnical Institute, Unifob, and the universities in Oslo, Bergen and Svalbard. The centre will help find reliable ways of storing CO2 by examining various methods of storing CO2 and how CO2 behaves when sequestered underground. The centre will also identify the best methods of injecting CO2 and monitoring that the CO2 remains underground once it is stored there.

SINTEF in Trondheim is leading BIGCCS, an international carbon capture storage research centre focusing on CO2 storage and management, together with more than 20 partners. The centre will develop knowledge, methods and solutions for safe, efficient and inexpensive CO2 management at natural gas and coal-fired power plants and for other types of industry. The BIGCCS Centre will also help to determine the extent of Norway’s offshore storage capacity for CO2.