The ELYSATOR offers a modern clean and proven alternative to problem of corrosion control in hot and cold water systems from large industrial systems to small domestic units.

Early underfloor heating systems used plastic pipes that were permeable to oxygen. Technology has since advanced to the point where it is now possible to produce underfloor heating pipes that are practically diffusion proof. Valves, threaded joints, circulating pumps, regulators, automatic bleed devices and faulty expansion tanks, however, are still potentially important sources of oxygen uptake. Oxygen diffusing into the heating water, too low a pH value and raised electrical conductivity of the system water can all lead to corrosion and blockage of the heating system from corrosion products.

In the past, the most common method of corrosion protection was to add chemical corrosion inhibitors. In many cases, however, it was found impossible to provide active protection in cracks or under deposits of dirt or rust, so this approach could not deliver a satisfactory solution to the problem. Furthermore, it is costly and time-consuming to monitor that the correct amounts of inhibitors are added. Using heat exchangers to separate the system into a heating circuit and hotwater circuit ultimately merely splits the problem into two parts without achieving active corrosion protection. Modern heating systems are more sensitive to signs of corrosion, limescale and other deposits.

The ELYSATOR offers a modern clean and proven alternative to problem of corrosion control in hot and cold water systems from large industrial systems to small domestic units. The ELYSATOR system is fitted to such diverse applications as the Swedish Nuclear Power generator to the new Oslo airport where over 40 units are installed. It has also been supplied to many thousands of buildings large and small to provide protection for the heating and chill water systems. 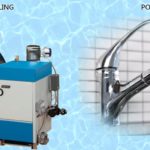