What do you need to do to adapt the Norwegian social life? Who can help you with you finance, insurance, family, healthcare and security. Find out by choosing the right subject below.   1. Health Systems 2. Private life (birth,...

What do you need to do to adapt the Norwegian social life? Who can help you with you finance, insurance, family, healthcare and security. Find out by choosing the right subject below. 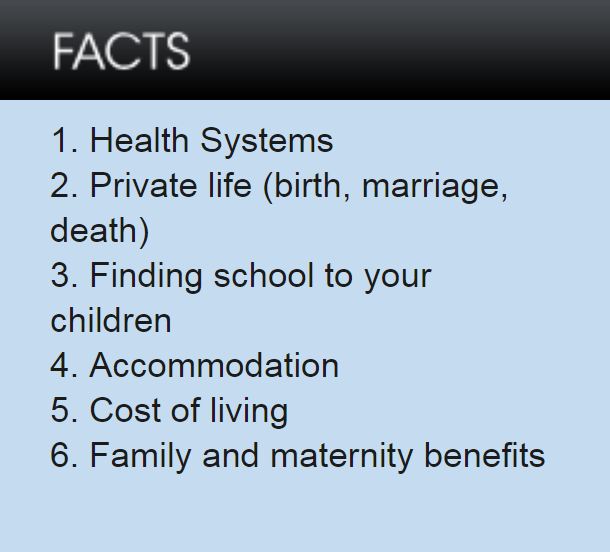 When you live and work in Norway, you will be registered with Norske Folketrygden [Norwegian National Insurance], which covers the entire population. This provides public health care which is financed by the Norwegian State and managed by the counties. A charge is payable for visits to doctors. Hospital stays are largely free of charge.

The Norwegian health service is based on a decentralised model. The State formulates policy, capacity and quality through budgets and legislation. The counties and municipalities are formally responsible for the planning and running of the health service within the law and budgeted frameworks.

The counties are responsible for the public dental service.

The following groups are included:
– Children and adolescents (below 21 years of age)
– People with impaired mental development
– Elderly and disabled people with chronic illnesses who reside at institutions or care homes

The rest of the population use the private dental service, which patients pay for themselves.

These are general practitioners who have contracts with the public sector/municipality.

All citizens registered at the Folkeregister [Register Office] are entitled to their own permanent doctor. Your permanent doctor has to give you an appointment quickly, at publicly set prices. This is a voluntary arrangement. If you choose to use a different doctor who does not have a contract with the municipality, costs are a lot higher. You can switch your permanent doctor up to twice a year. (But to see a new doctor, the doctor of your choice has to have room for you on his books.) A list of doctors can be found in Gule sider [Yellow Pages].

A number of private hospitals and health institutions have been established as a supplement to public institutions and services. There are also semi-private arrangements whereby – for example – physiotherapists operating privately perform services on behalf of public health authorities.

The emergency service, accident and emergency, offers medical services in emergencies (accident or illness). This is a municipal service.

Most children are born at the local hospital. Babies are registered in the same municipality as their mothers, unless the parents decide otherwise.Children with one Norwegian parent automatically become Norwegian citizens.

As a rule, child support is paid to all mothers (when the child lives in Norway) until the child reaches the age of 18. Cash benefits are paid for children aged between 1 and 3, unless the children go to publicly financed or part-financed nurseries. In accordance with the EEA agreement, there are exceptions to the requirement for children to live in Norway, if the breadwinner works in Norway.

To marry in Norway, you have to be 18. A certificate has to be produced confirming that there are no obstacles to the couple marrying. Church weddings and civil weddings are permitted. In accordance with the law, married parents have the same responsibility for any children they may have together.

Unmarried couples can live together in a formalised relationship and have many of the same rights as couples who are formally married. But as far as any children are concerned, they have to enter into an agreement stating that they hold equal responsibility for their children. Cohabiting couples do not automatically have mutual inheritance rights. To have mutual inheritance rights, wills have to be written stating this.

The Norwegian Partnership Act permits two individuals of the same sex to register their partnership. This then has the same legal consequences as marriage, apart from the right to adopt children.

Irrespective of whether or not individuals are members of the Church of Norway, the parish priest is informed of any deaths. Burial normally takes place within eight days. Funeral parlours can provide information on the formalities and ceremonies in the event of deaths and burials.

3. Finding school to your children

Children under the age of six are allowed a place at a nursery. Things are reasonably fair, but there are not enough nursery places for everyone in Norway, so it can be difficult to find a place. The municipality where you will be living can provide you with information on local conditions.

All foreign children are entitled and obliged to go to school, and all compulsory education is free. Children start school the year they reach the age of 6.

When you know which town or municipality you will be living in, you should contact the local school authorities/nursery office. These also have information on nurseries. Essentially, children go to the school which is nearest to the place where they live with their families.

If the child is in one of the first four years of school, with a relatively short school day, you may need supervision for them once they have left school for the day. Skolefritidsordningen [the School and Leisure Scheme], or SFO, is a municipal facility for the hours before and after school. SFOs can be found at schools, or in their immediate vicinity. As this is not part of the school day, a charge is payable.

It may be a good idea to contact the school before you move to Norway so that they are aware that they will be having a new pupil.

There are a number of foreign schools in Norway which offer education in languages other than Norwegian; primarily English, German and French.

The cost of accommodation varies widely in Norway, and has gone up a lot over the past few years. The highest prices are in Oslo and its surrounding areas, Bergen and Stavanger. Finding accommodation which is not quite so expensive is easiest outside of the central areas of the biggest cities.

There are several different ways to live in Norway. You can rent, live in a housing cooperative or buy your own home. The rental market in Norway is small; by far the majority of people own their own home.

Houses and apartments are normally advertised in the local press and in the Aftenposten national newspaper. Some newspapers have a housing supplement one day a week, and also place ads for accommodation on the Internet. You can also advertise for accommodation yourself.

Estate agents mostly deal with the sale of houses and apartments, but they also arrange rentals. You can find them in ‘Gule sider’ [Yellow Pages] under ‘Eiendomsmeklere’ [Estate Agents]. Estate agents deal with the formal side of things, such as financial arrangements and registration. Loans are mostly arranged via banks, and you can take out a mortgage against your home.

If you want to rent a house or apartment, you should have a rental contract. These contracts are normally valid for a year at a time, with subsequent periods of five years, with mutual entitlement to cancellation. The notice period is normally a month. As a rule, you have to pay a deposit of one to three months’ rent. Your deposit has to be placed in a blocked account. You can find standard contracts in bookshops or on the Internet, and you can also get them by contacting Leieboerforeningen i Oslo [the Oslo Tenants’ Association] This is a special interest organisation which acts in the interests of tenants on matters relating to landlords of houses and apartments. Most rental properties are apartments, which are rented out either furnished or unfurnished.

Living expenses, which include heating and municipal charges for water and refuse collection, are the biggest outgoing for families or single people.

Transport expenses account for about 18%. The third biggest outlay for households is the cost of recreation and cultural activities, approx. 12%. People spend about 11% of their wages on food and non-alcoholic drinks.

Alcoholic drinks and meals in restaurants are considered to be expensive in Norway, particularly in comparison with other European countries.

Mothers who are members of Folketrygden [Norwegian National Insurance] and who have been employed in paid work for six out of the past ten months are entitled to paid maternity leave for 44 weeks at full pay or 54 weeks at 80% of full pay. The choice made when the benefit period starts will apply for the entire period, and for both parents.

The mother may take three of her weeks of leave before the birth. Six weeks of the paid leave period are reserved for the father, on the condition that he is at home and looking after the child. The other weeks may be divided freely between the mother and the father.

Any mother who has not been in paid work is entitled to a one-off payment of about NOK 35 000.

Pregnant women are entitled to have their work adjusted. If they need to go on leave early due to particularly onerous work, they are entitled to a pregnancy subsidy without this affecting their regular maternity leave or the one-off payment.

Cash benefits will be paid for children aged between one and three who do not take full-time places at any nursery receiving public funding. These cash benefits may be reduced according to the amount of time the child spends at nursery.

Child benefit is paid to everyone with children under 18.