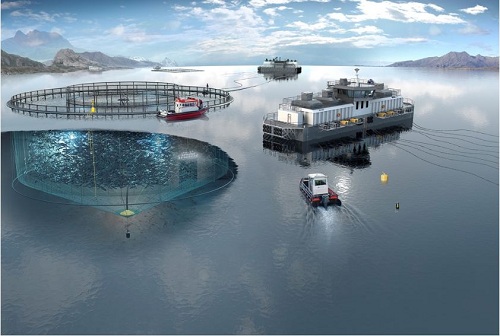 AKVA group is ending the quarter with an order backlog of approximately 1 BNOK.

The growth strategy in AKVA group continues with the acquisition of Sperre AS, a leading ROV and subsea provider to the aquaculture industry and investments in increased capacity in Helgeland Plast AS.

The cage based segment in the Nordic region had an increase in revenues of 72% YoY. EBITDA was up from 10.3 MNOK in Q4 2015 to 26.9 MNOK in Q4 2016. All entities are contributing well. The Farming Services operations is increasing and strengthening the Group.

We saw increased activity in Chile in Q4 and they deliver a positive EBITDA of 1.8 MNOK after several poor quarters. Q4 in Canada was slow as regards to new sales, but the area continue to deliver good margins. Australia remain a small, but profitable operation.

In Scotland the OPEX based revenue and service sales performed very well and offset a more quiet project market. The Turkish operation continued to improve and quarterly financial performance were good. We continue to see increased activity in the Sea Bass and Sea Bream industry in the Mediterranean and the outlook for 2017 is positive. Export to emerging markets have mainly deliveries to Iran in Q4. Emerging markets are dominated by a few but large contracts and this will continue to give variations in the P&L quarter by quarter.

The land based segment with Aquatec Solutions and Plastsveis performed very well with good margins and ending the year with a high order backlog. However, restructuring costs and one-off expenses relating to AKVA group Denmark reduced the overall EBITDA for the segment by 19.9 MNOK in Q4. The EBITDA was also offset by a 4 MNOK earn-out to former shareholders of Aquatec Solutions. The land based segment ended the quarter with a strong order backlog, representing 41% of the total backlog for the Group at end of 2016.

The balance sheet is strong and we had a strong operational cash flow in Q4. Working capital as a percentage of 12 months rolling revenue is 2.2% (8.8%). We are able to maintain a very low working capital despite record high activity. Cash and unused credit facilities amounted to 256 MNOK at the end of Q4 (160 MNOK).Total assets and total equity amounted to 1,307 MNOK (1,083 MNOK) and 452 MNOK (428 MNOK) respectively, resulting in an equity ratio of 35% (40%) at the end of Q4.

Acquisition of Sperre AS – the leading ROV provider

Sperre AS will be the “center of excellence” in AKVA group in terms of ROV technologies as well as relevant subsea technologies. AKVA group ASA acquired 66% of the shares in Sperre AS. The closing of the transaction took place on November 4th, 2016. The enterprice value on a 100% basis was NOK 126.9 million for Sperre AS. The Minority Shareholder has an option to sell to AKVA, and AKVA has an option to purchase from the Minority Shareholder the remaining 34% of the shares after three years, where the pricing is based on financial performance in the three-year period. The acquisition was paid in cash and was financed with a loan from Danske Bank.

In partnership with the companies Sinkaberg-Hansen AS and Egersund Net AS, AKVA group ASA established the company Atlantis Subsea Farming AS on February 1st, 2016 with the purpose of developing submersible fish-farming facilities for salmon on an industrial scale.  Atlantis Subsea Farming AS has applied for six development licenses to enable large-scale development and testing of the new technology and operational concept.

On November 26th The Norwegian Directorate of Fisheries informed Atlantis Subsea Farming that the concept for submersible farms fell within the general scope of the scheme for awarding development fish-farming licenses, and that the Directorate will continue on to consider the concept further with an objective to award one or more licenses.

Atlantis Subsea Farming AS has engaged in a process with the Directorate to provide additional information, including target financial criteria for the concept.

A dividend of NOK 0.50 per share will be paid out in Q1 2017. Total dividend pay out  in Q1 2017 will be 12.9 MNOK. The dividend is in accordance to AKVA group’s current  dividend policy. For  further details on  dividend please read the full fourth quarter report and/or a separate stock notice regarding dividend.

Biological conditions remains challenging for core customers and thus focus on solutions to improve productivity and efficiency. At the same time customers experience record earnings and cash flow. We see this being reflected in high activity level in the Nordic cage based segment.

We expect increased activity in UK and Chile in 2017 and a solid recovery compared to 2016. In Canada we are facing somewhat increased competition in the market and we have moderate expectations for the development in 2017. The activity in the Mediterranean represents an upside potential and we will focus our resources in this region over the next quarters.

The land based segment is growing in AKVA group with very high activity level. A key for AKVA group is to be selective and focus on project execution.

Service and after sales in the Nordic region has potential for further improvements and we will put additional focus on this going forward. There is also an untapped potential for the current core business, particularly within sourcing and supply chain.

AKVA group is a technology and service partner to the aquaculture industry worldwide. The company has 792 employees, offices in 8 countries and a total turnover of NOK 1.6 billion in 2016. We are a public listed company operating in one of the world’s fastest growing industries and supply everything from single components to complete installations, both for cage farming and land based aquaculture. AKVA group is recognized as a pioneer and technology leader through more than 30 years. The

Corporate Headquarter is in Bryne Norway.